Breaking Down Every Single Scene In The Stunning ‘El Camino’ Trailer 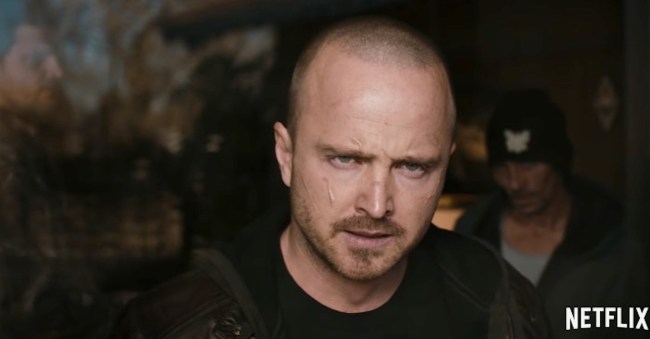 After a month of minimal teasers and sparse interviews, the full official trailer for El Camino: A Breaking Bad Movie was released on Tuesday in all of its glory.

The trailer somehow says a lot and a little all at once, as it reveals almost nothing about the plot while also saying tons about the type of movie this will be.

First, some overall points before we dive into the scene-by-scene breakdown:

Now, to the breakdown:

The film is said to begin “moments” after the Breaking Bad series finale, meaning the opening shot of police lights likely has to do with Walt’s attack on Jack, Todd, and the rest of the Neo-Nazis. Given that Jesse is still shaggy-haired and in the El Camino, these moments are likely at the start of the film and will track Jesse’s immediate escape.

After evading the initial wave of police, Jesse makes it to one of the only people in the world he could go to in such a situation: Skinny Pete.

Obviously exhausted from not only evading the police but enduring months upon months of meth-cooking torture, Jesse tries to get some rest before even showering himself off.

A common fan theory is that characters from the Breaking Bad universe will appear in the form of flashbacks, and given the look on Jesse’s face upon waking up — a look of nostalgic sadness — it appears that those flashbacks will come in the form of dreams.

Badger then joins the party, confirming that both of Jesse’s old meth-smoking buddies will be assisting their beaten-down friend in his attempt to escape.

Finally cleaning the months worth of dirt off of himself, Jesse looks himself — and his past — in the mirror for what’s probably the first time since he was taken captive. It’s wonderful acting from Aaron Paul, as you can see just how tortured Pinkman’s life has truly become. He’s a man who can barely recognize himself.

In an effort to further disguise himself, Pinkman goes back to the iconic shaved head that he rocked in the later seasons. He’s also looking at something, and while whatever that something is remains unclear, whatever he’s looking at / talking about, it seems to seriously rattle Skinny Pete and Badger just based on their body language.

It’s at this point that the trailer simultaneously becomes increasingly vague and beautiful, as it’s filled with stunning cinematography that doesn’t really provide much context. And one of these shots gives us our first look at Jesse with his old, and unfortunately deceased, mentor Mike Ehrmantraut.

Pretty strong evidence if you ask me.

The following shot is equally as haunting and stunningly beautiful, as it appears to be Mike and Jesse near a river reminiscent of where Ehrmantraut was ultimately killed by Walter White. The man on the left certainly looks like Jesse, while the guy on the right is assuming classic Mike Ehrmantraut posture

We then see another shot of Pinkman evading the authorities, only this time, there’s no real way to tell exactly where they’re going and why so many of them are going there.

We get a shot of the photo of Andrea and Brock that the Neo-Nazi gang used to keep Jesse Pinkman cooking, which is also the place where Walter White died, indicating one of two things: we’re getting some sort of flashback involving this locale or this location will be visited in the main plot of the film, whether it be by Jesse, the police, or otherwise.

The following shot is of Jesse’s El Camino, only this time, it’s been given a bed roof, meaning he’s acquired some further help along the way, possibly from an old Breaking Bad friend, who we’ll discuss later.

In perhaps the most interesting shot of the trailer, a still shaggy-haired and covered-in-dirt Jesse drives out the desert to bury what appears to be a woman’s body — Andrea.

However, given that there’s simply no way Jesse would be able to get to Andrea’s body before the police did — she was assassinated on her front porch with her son still in the house, after all — this further raises the question of how many dreams/visions Pinkman will have throughout the course of the film, if any at all.

We then get an overhead view from this very desert that appears to show two people standing next to the El Camino.

At this point, the plot from the trailer has completely evaporated, as there are very few clues to indicate as to what’s happening in any of the scenes shown, given the lack of context.

There’s a quick shot of one of the iconic scenic time lapses that Gilligan frequently deploys in Breaking Bad and Better Call Saul.

Before the trailer diverts back to context-less on-the-run madness.

This could possibly be a shot of the aforementioned Ole Joe, the mechanic that Jesse and Walt previously used to crush various nefarious vehicles.

Jesse can then be seen cowering in intense fear outside of a crime scene, which is most likely a locale from Breaking Bad lore, perhaps even Gale Boetticher’s apartment (after all, it’s only been less than two years since Jesse murdered the ill-fated assistant chemist).

It’s at this point that I truly have no idea what’s going on in the trailer, as Jesse can be seen with a lighter igniting was appears to be a warehouse full of explosive canisters.

He’s then seen hiding from a group of people who, based on their body language, are completely unsuspecting criminals rather than on-high-alert police officers.

Which leads to the trailers closing images:

While closing moments include the trailer’s only dialogue (“You ready? Yeah”), what’s most notable is Pinkman’s expression, as he seems far more comfortable than he did at any other point prior to that. As to where he is, what he’s doing, or who he’s talking to — I couldn’t have less of a clue.

And honestly, that’s the way it should be.