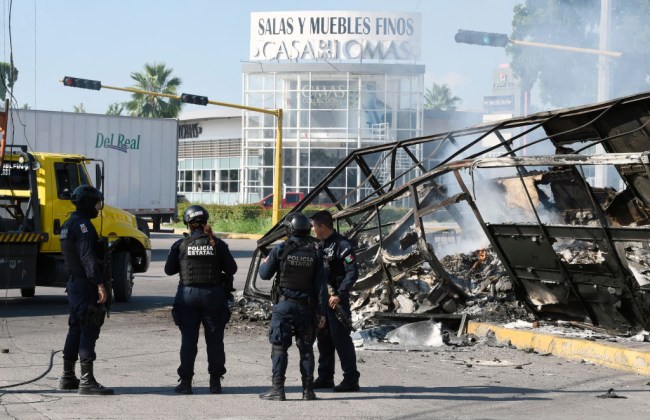 Authorities apprehended the son of El Chapo on Thursday, but then hours later, Ovidio Guzmán López was able to escape after the Sinaloa Cartel overpowered the Mexican military.

There were fierce gun battles in the streets of Culiacán, the capital of Mexico’s northwestern Sinaloa state. Mexican military successfully captured Joaquin Guzman’s 28-year-old. The bloody urban warfare paralyzed the city, and citizens were petrified as gunshots whizzed all around.

Authorities arrested Ovidio Guzmán López after members of the army and National Guard were patrolling Culiacán and then were shot at from inside a house. The 30 Mexican soldiers stormed the house and found Ovidio inside according to Vice News.

However, it was later revealed that Mexican authorities released El Chapo’s son. Mexican Security Minister Alfonso Durazo said, “The decision was taken to retreat from the house, without Guzman, to try to avoid more violence in the area and preserve the lives of our personnel and recover calm in the city.”

“With the goal of safeguarding the well-being and tranquillity of Culiacán society, officials in the security cabinet decided to suspend the actions,” Durazo added.

“The capture of one criminal cannot be worth more than the lives of people,” López Obrador said. “This decision was made to protect citizens. You cannot fight fire with fire. We do not want deaths. We do not want war.”

“It was decided to protect people’s lives, and I was in agreement with that,” Lopez Obrador said of his advisors’ decision to free Ovidio. “It’s not about massacres. We can’t value the capture of one delinquent over the lives of the people.”

Mexican Pres. @lopezobrador_ says security forces “did well” in shootout and saved lives by releasing Ovidio Guzman.@ksieff tells @cbsnews the country has never seen a street battle like this.

Some reports claim the Sinaloa Cartel held eight troops and one officer hostage until Ovidio was released.

Videos on Twitter allegedly show Mexican soldiers being stopped by Sinaloa Cartel members at a toll booth in Culiacán. The tense showdown calmly ends in friendly handshakes between the cartel and Mexican military.

Mexican soldiers being overthrown by #Sinaloa cartel members at a toll booth in #Culiacán during today's shootouts. Soldiers had to shake hands with them. Who's really in charge in Mexico? pic.twitter.com/kXzHzbpj1y

The Sinaloa Cartel flaunted some extremely high-powered weapons that you usually only see militaries using. A video appears to show cartel members with an M249 Para machine gun, M72 LAW anti-tank rocket-propelled grenade launcher, and a mounted Browning M2, all of which the U.S. Armed Services use or have used.

Some of the cartel gunmen in #Culiacán are incredibly heavily armed – here we see an M249 Para machine gun and an M72 LAW anti-tank rocket-propelled grenade launcher (!!!) amongst other weapons.pic.twitter.com/XhU1ljNOJ2

In spite of the release of #ElChapo 's son the clashes continue between the members of Cartel of Sinaloa and Mexican forces.

They are using 50-caliber Browning M2 machines against the Mexican police. pic.twitter.com/hD9ff7tLAT

Sinaloa Cartel vehicles were patrolling the streets following the skirmish, showing that they control the city and not the authorities.

This video allegedly from Culiacán last night. Check out how many cartel vehicles on the streets. This is called territorial control. It’s the cartel, not security forces, that seems to control the city streets. Not all the time, but clearly when they want/need. pic.twitter.com/o5P64uKJQC

Jose Luis Gonzalez Meza, a lawyer for the family, revealed that Guzman Lopez was free and had been in touch with his family. “Ovidio is alive and free,” he said.

Cristóbal Castañeda, the public safety director for the state of Sinaloa, said at least two people were killed and 21 others were injured from the military operation.

The son of gangster El Chapo has escaped arrest after police were surrounded by armed cartel fighters.

Suspected drug trafficker Ovidio Guzman was one of four people discovered by the national guard in a house in Culiacan, Mexico.

On Monday, 13 Mexican police officers were killed in a cartel ambush in Michoacan. There were 30 heavily-armed cartel members in five “presumably armored” vehicles.

Joaquín “El Chapo” Guzman is serving a life sentence in the U.S. after convictions for drug trafficking and weapons charges. Ovidio Guzmán was indicted in 2018 by a grand jury in Washington, accused of trafficking cocaine, methamphetamine, and marijuana charges into the United States.