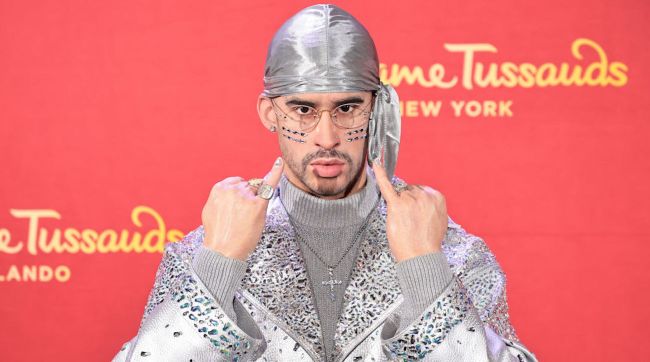 Clearly not satisfied with unleashing Morbius on innocent audiences earlier this month, Sony is once again returning to their increasingly bizarre Spider-Man universe with a film about the character El Muerto. Who?! Exactly.

To make the project even more bizarre, rapper Bad Bunny is set to star in the film as the titular hero (?). The announcement was made at CinemaCon on Monday night.

According to Deadline, El Muerto, a.k.a. Juan Carlos, “was a super-powered wrestler who originally fought Spider-Man in a charity wrestling match in which he nearly unmasked the web slinger before being stung by Spider-Man with a paralyzing poison.”

The Deadline report also states that Bad Bunny “took matters into his own hands and began mining the Spider-Man library for Latin characters that would suit him.”

El Muerto will be the latest film in Sony’s Spider-Man universe following the two Venom films, Morbius, Kraven the Hunter (which is currently filming), and Madame Web, which is set to hit theaters next summer.

Though El Muerto isn’t as popular as Venom or Kraven the Hunter, Sony’s rush to get this film into development had a lot to do with Bad Bunny’s persistence in finding that right superhero property for himself.

The superstar is set to make his major studio debut in the highly-anticipated action pic Bullet Train on July 29, a project Sony is very high on and has already led to Aaron Taylor-Johnson landing the lead role in Kraven the Hunter. The same situation looks to have happened with Bad Bunny with execs extremely high on the final Bad Bunny footage from the film. [via Deadline]

It amazes me how Sony keeps making these stupid Spider-Man villain movies no one wants when they have a literal goldmine of alternative Spider-Mans that could be getting movies instead. Spider-Man Noir, Spider-Man 2099, Spider-Gwen, etc. but instead they keep doing this bullshit https://t.co/mmtgOfHrkX

Sony are you okay https://t.co/wjetlwm9RL

First marvel movie to get no sales https://t.co/Wugxjpt3OM

Could’ve been about Silver Sable, or Tombstone, or Prowler, or hell I think a movie about Rocket Racer may have been more interesting tbh https://t.co/B4oA15uzeA

Sony will literally produce a movie about the most obscure Spider-Man characters instead of making a Black Cat movie https://t.co/qyjx8zce7J