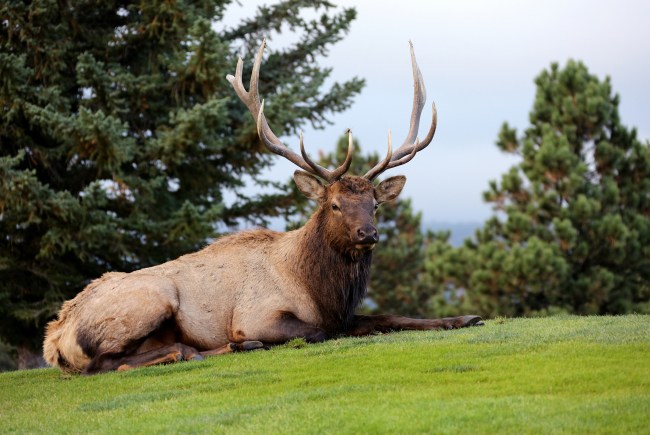 The average Bull elk weighs 700-pounds and measures 5-feet-tall at the shoulders. They are formidable creatures and anyone who has ever seen them up close knows this. The set of antlers alone can weigh up to 40-pounds on a mature bull.

I’ve never been what you’d consider ‘up close’ to a bull elk because that would be foolish but this golfer in Colorado who was gored by a bull and had his kidney ripped into pieces also didn’t intend to get close to the elk. According to the report, the golfer said they were minding their own business and he wasn’t doing anything to antagonize the elk.

The victim of this freak elk attack is 41-year-old Zak Bornhoft who had to be rushed into surgery to repair the damage he sustained at the Evergreen Golf Course in Evergreen, Colorado just outside of Denver. He spoke with CNN about the attack and shared some grizzly details including how the elk impaled him and tore his kidney into separate pieces…

“The golfing went pretty good throughout the day until we got to the back nine and saw all the elk,” Bornhoft told CNN in a phone interview from the hospital.
He said they tried to steer clear of the animals and keep their distance. Bornhoft and one of his friends were in a golf cart between the 16th and 17th hole when a bull elk charged at them.

“This bull elk was just eyeing us down,” Bornhoft said. “We were slowly going forward and he started charging at us and he missed. My buddy gassed it to get away and the elk gored me on my right side.”
The elk’s antler punctured Bornhoft in the back side of his right hip, going in deep enough to slice his left kidney into two pieces. He was rushed to a local hospital where he continues to recover.
“It was unbelievable,” he told CNN. “(The elk) was just freaked out and there was nothing we could do.”

Bornhoft seemed to be in good spirits as he talked to CNN from the hospital on Tuesday and he said he is making steps in the recovery process. His wife, Megan, has been able to visit him and be by his side.
“I am so very thankful that this buck struck where it did because things could have looked much different right now!” she posted to Facebook. “I’m blessed to be sitting next to my husband, even if it’s masked up in a ICU room.”(via)

He later said that it was a ‘wild experience’ and he never expected to be ‘jabbed by an elk’ on the golf course which is something I can 100% relate to. Never in my wildest dreams would I expect to be attacked by an elk or really any animal at all on a golf course. I’d be wary of alligators and I’ve crossed paths with bobcats on the course but they’re always more scared of us than we are of them in my experience.

What happened to Zak Bornhoft sounds like a nightmare scenario and one that I’d expect to see played out in a Romantic-Comedy and not in real life. This is the first time in 15 years that a golfer has been gored by an elk. Fall is mating season for elk and the bulls can sometimes become more aggressive and territorial as they defend their potential mates from other bulls and it’s possible this massive elk saw the golfer and his cart as a threat.

According to reports, elk are just all over this course (and area). It’s always advised to keep a safe distance away from wildlife and to never engage with them. For more on this story, you can head on over to CNN.