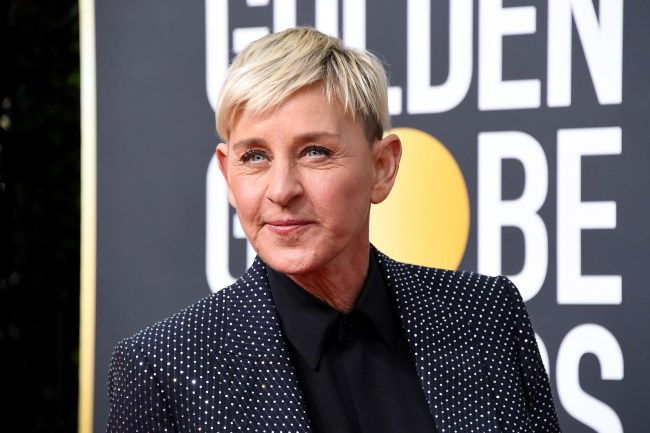 Another day, another flock of wingless seagulls squawking their pathetic complaints about Ellen Degeneres. Disclaimer: I’m not even a huge Ellen fan. I’m not defending her out of loyalty, or because I love her show or her civic outreach or her perfect smile and stylish haircuts. Rather, I’m incapable of letting these pathetic trolls have their day. Last week, it was a bodyguard whining about how Ellen didn’t know his name. Before that, a waitress said Ellen once WROTE a complaint to the restaurant’s owner about the waitress’ chipped nail polish (sure! That happened!) And these complaints all came on the heels of a tidal wave of revelations about how Ellen isn’t quite as nice as the Ellen we see on her show.

Today, it’s a story about Ellen calling Steve Jobs to tell him the iPhone font should be larger:

NY Post– “She stopped everything and made a call. Next thing we know, we literally hear Steve Jobs pick up and say, ‘Hi, Ellen’ … Ellen told him the iPhone should have a bigger font,” the producer said.”

That… that’s news? That’s the big Ellen reveal of the day? What a fucking joke.

Here’s the deal: we all have a buddy who started some useless, doomed-to-fail company. Maybe your buddy created a new line of velcro shoes and you bought a pair to support him. Maybe the velcro doesn’t stick that well. Maybe one day, you “stop everything” and call your friend to let him know, probably in a very kind way, that his velcro needs more stick. Maybe he adds some more hooks and fuzz to the velcro, and the company improves as a result. He calls you to thank you for being a good friend. Good job, friend.

In Ellen’s world, Steve Jobs is that buddy. These people are playing above the rim, in an entirely different sphere that we will never know or understand. The haters call it a “bubble;” I call it “achievement”—that mystical land where mention your pal Steve Jobs and you’re not just name-dropping because he’s actually your friend.

They’re friends! Want to know how I know they were friends? She has his direct fucking cell number. You think STEVE JOBS gave his cell out willy-nilly like some 6th grader with his first Nokia brick? Ellen probably texted with him often—maybe he advised her on turtlenecks to buy, maybe she offered advice on his latest gadgets. That’s how friendships work. Our puny brains can’t fathom the gall of somone calling the legendary Steve Jobs to playfully tell him to enlarge the font on his new cell phones because she lost her reading glasses. But that exchange ignores the context in which these two probably knew each other. I suspect it went something like this:

“Everyone is fine, thank you.”

“I won’t keep you. Reason I’m calling, I lost my glasses. And I’ve got your new phone—thank you, by the way, for the basket of 40 phones you sent over.”

“Ah. I’m glad you brought this to my attention. We’re working on a software update that will allow you to enlarge the font. Sorry Ellen.”

“No problem! So glad to hear it. Love you Steve!”

Oh Ellen, you entitled witch. Exit thy privilege bubble and hold thy iPhone screen closer to your face like the rest of us nearsighted plebes.

I don’t understand why people feel the need to tear down society’s greatest achievers. It’s true what Harvey Dent said: you either die a hero, or live to become the villain. But if you want me to hate Ellen Degeneres, it’s going to take a lot more than a perfectly helpful phone call to Steve Jobs—who, by the way, was actually an asshole.