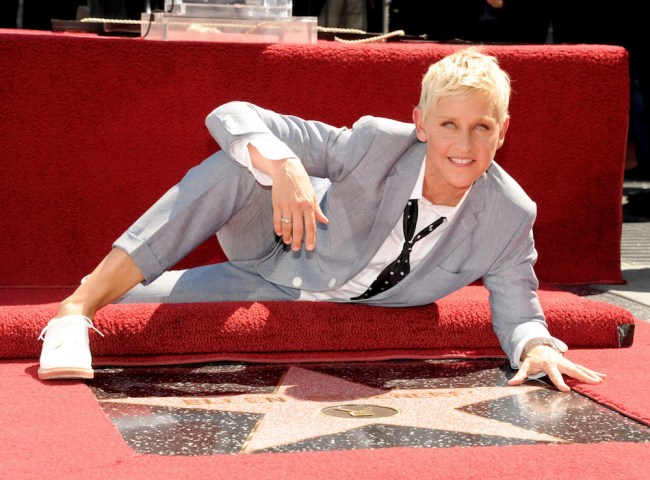 As much as my colleague would like “all us punk bitches” to leave Ellen DeGeneres alone, a new story emerges daily that makes it incredibly difficult to keep giving the talk show host a free pass.

The “Ellen is canceled” party started over a month ago when former employees of the daytime talk claimed that DeGeneres is “one of the meanest people alive.”

DeGeneres ignored the grumblings and spent time on her TV show, comparing her massive mansion to “being stuck in jail.”

Today in “Ellen DeGeneres kinda sucks” news, a former associate producer for “The Ellen Show” told the New York Post that the host once called Apple CEO Steve Jobs to complain about the font size on iPhones.

DeGeneres lost her reading glasses and couldn’t read the font on her phone.

“She stopped everything and made a call. Next thing we know, we literally hear Steve Jobs pick up and say, ‘Hi, Ellen’ … Ellen told him the iPhone should have a bigger font,” the producer said.

The producer went on to explain that Ellen isn’t a jerk, she just “just lives in an incredibly privileged bubble and is out of touch with the real world.”

Which sounds like a nice way of explaining the actions of a jerk.

The Post spoke to another former staffer who most likely isn’t sending DeGeneres Xmas cards every year.

Another former staffer (also unnamed) for “The Ellen Show” also spoke out about the recent allegations of rude behavior that have plagued the host and comedian, telling the Post that the stories are “all true.”

“Is she always nice? No,” the former staffer told the outlet. “It irritates me that people think she’s all sweetness and light and she gets away with it.”

The iPhone saga comes a week after a former bodyguard for DeGeneres, and wife Portia De Rossi, recounted his lone experience with Ellen at the Academy Awards.

“Ellen pretty much just gave me a side glance out of her eye and didn’t even say ‘hello,’ or ‘thank you for protecting my mother, my wife, and me,’” Majercak told Fox News, adding, “It was very cold and it was very sly and it was actually kind of demeaning in the way that she treats people other than those who are in her circle.”

More stories about Ellen being less-than-awesome are likely to appear online and in print, especially since crew members for “The Ellen DeGeneres Show” reported in mid-April they “haven’t received communication from DeGeneres or show executives about their pay or work hours during the coronavirus pandemic.”

Maybe Ellen would call but she only gets one phone call a day from jail.