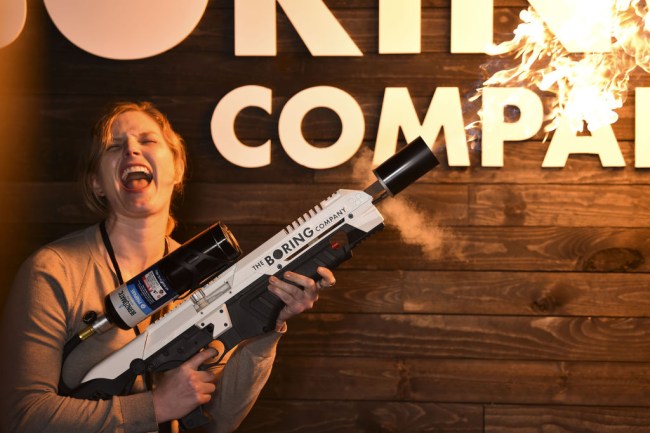 Elon Musk was one of the lucky few to make it out of the dotcom bubble fairly unscathed after he sold his software company for $340 million a year before things went to shit.

After finding himself flush with cash, he leveraged his newfound fortune to help create what would eventually become PayPal, which was acquired a few years later for a cool $1.5 billion.

The entrepreneur would eventually turn his attention to revolutionizing the world of transportation on both a terrestrial and extraterrestrial level in the form of Tesla and SpaceX. However, he wasn’t satisfied with stopping there.

A few years ago, Musk revealed he was turning his attention to the subterranean when he announced the launch of the Boring Company and his intentions to break ground on a tunnel in Los Angeles that would theoretically make getting around the city less of a living hell.

Musk put up some of his money to help make the vision a reality but also turned to some unconventional strategies to raise funds—none of which were more notable than the fully-functioning flamethrowers he sold online for $500 a pop.

By his account, Musk raised millions of dollars by selling the fire-spewing guns but now finds himself in hot water because of them courtesy of the last person I’d want to piss off: Pablo Escobar’s brother.

According to TMZ, Roberto Escobar Gaviria—who once served as the accountant for the Medellin cartel—says one of Musk’s engineers stole the idea for the flamethrower after stopping by the family’s Colombian compound in 2017 and seeing Esobar’s version in action.

It didn’t take long for Musk to flippantly deny the accusations on Twitter by reminding Escobar that the flamethrower in question is actually “Not a Flamethrower,” a name he chose to get around California’s ban on the sale of “real” flamethrowers.

Escobar responded in kind by slashing the price of his flamethrower in half, which you can buy here if you’re so inclined.