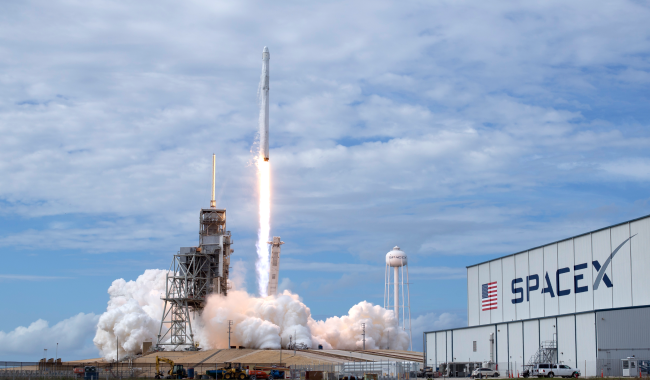 As if we aren’t faced with enough litter here on Earth, Elon Musk is now leaving some of his trash on the moon.

A rogue four ton SpaceX Falcon 9 rocket that’s been floating around in space since 2015 is about to slam into the moon in a little over a week.

According to Bill Gray, the creator of Project Pluto which tracks Near Earth Objects, writes, “Space junk can be a little tricky. I have a fairly complete mathematical model of what the Earth, Moon, Sun, and planets are doing and how their gravity is affecting the object.”

However, he says he usually makes predictions “with a good bit of confidence” because he has “a rough idea of how much sunlight is pushing outward on the object, gently pushing it away from the sun.”

With all of that in mind, Gray says the “unpredictable effects are very small” and his calculations say the rogue SpaceX Falcon 9 rocket will hit the moon sometime around March 4.

Gray also writes, “This is the first unintentional case of which I am aware. I keep track of a dozen or so objects in ‘high,’ near-moon orbits, mostly so that the folks looking for asteroids will know where they are (and can ignore them; they’re looking for rocks, not junk.) In theory, given enough time, such objects will either hit the earth, or the moon, or gain energy by passing the moon and be ejected into orbit around the sun.”

The SpaceX rocket will hit the moon’s surface at a speed of up to 1.6 miles per second

Jonathan McDowell, an astronomer from the Harvard-Smithsonian Center for Astrophysics, says that despite what is expected to be a massive 5,760 mph collision, it shouldn’t affect us here on Earth.

For those asking: yes, an old Falcon 9 second stage left in high orbit in 2015 is going to hit the moon on March 4. It's interesting, but not a big deal.

Others weren’t so kind.

Back in 2019, we reported that according to the European Space Agency (ESA), there are over 750,000 pieces of space debris orbiting Earth. So much debris that trying to keep it from slamming into and damaging things like the International Space Station has become a full-time job.

A year later, Elon Musk announced plans to put 42,000 more satellites into orbit around Earth. That number was 15 TIMES the current number of operational satellites in orbit at that point in time.

At some point, according to experts, the amount of space debris surrounding Earth could not only limit our ability to use telescopes to study space, it could stop us from going to space at all.

Reactions to the news that one of Elon Musk’s SpaceX rockets was about to scatter debris on the moon were not terribly kind.

Not content with cluttering up this planet with human junk, we have to expand our pollution to the moon. What a “superior species” we are.

Siri, give me the perfect illustration of Elon Musk's giant ego.https://t.co/El2ayVqZxZ

It’s not enough that he ruins everything on earth he touches. Now he’s defacing the moon.

Congratulations to Elon Musk, the biggest fraud of our generation, for being the first to throw his old refrigerator into the local river. #JoeRoganOfSpacehttps://t.co/Cmref2TMZE

Glorified galactic graffiti artist , Elon Musk, is about to tag the moon with his rocket. Can't you get fined for space littering? https://t.co/4Dautdcwrh

Mark my words: Elon Musk will eventually ruin space for everyone else. https://t.co/ojKCgpR5uR

Am I the only one disappointed that this article doesn’t contain the line “Elon Musk has attained the next level of supervillain by literally attacking the moon, once again leapfrogging Jeff Bezos”?https://t.co/QfjA9gemW8