The 42,000 Satellites Elon Musk Wants To Put Into Orbit Could Cause Us Some Serious Problems 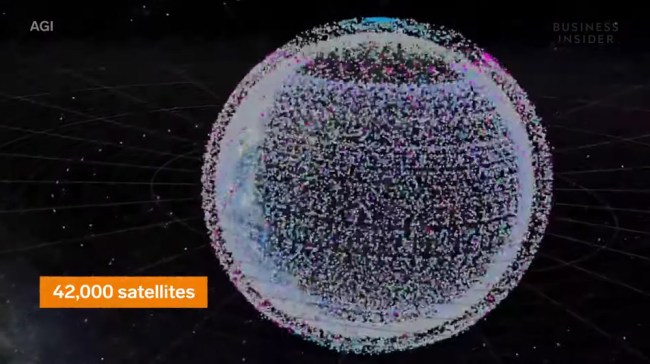 Billionaire SpaceX and Tesla founder Elon Musk warned in 2019 that if a giant asteroid were to make a beeline for Earth, which would be very, very bad, “we have no defense.”

NASA and other space agencies have reportedly been working very hard to remedy that scary situation.

Another problem we currently face with regard to space is the fact that there is so much junk floating around Earth it may limit our ability to travel the galaxy in the future.

As I wrote last year, there’s so much junk floating around in space that trying to keep it from slamming into and damaging things like the International Space Station has become a full-time job.

Ralph Dinsley, founder and executive director of Northern Space and Security LTD, said about all the debris, “We could have a major space junk event that will mean that we can’t launch beyond low-Earth orbit and we trap ourselves on Earth.”

So what is Musk doing to help with all of this? He’s planning to launch 42,000 of his Starlink satellites into orbit around the planet.

Think our atmosphere is cluttered with space junk now? According to Tech Insider, Musk’s plan involves adding 15 TIMES the current number of operational satellites in orbit today to the mess.

His stated hope is that the satellites will be able to bring high-speed internet to all corners of the world, as nearly half of the world’s population currently does not have access.

Not a terrible idea. Of course, if he succeeds in his plan, Musk’s SpaceX also stands to rake in $30 to $50 billion a year, so it’s not really a philanthropical venture.

None of that, however, will help the problems we’re already addressed here.

As Tech Insider points out, all of Musk’s satellites will be much closer than most satellites, anywhere from 200 to 400 miles above the planet in low-Earth orbit.

But this scheme isn’t without problems. Starlink satellites are bright. They reflect the sunlight and shine it back towards Earth, so they end up looking like bright moving stars. As cool as it may look, that comes with problems.

Starlink satellites are most visible in the night sky right before dawn and right after dusk, which is the exact time that astronomers are hunting for near-Earth objects or asteroids, objects that could hit Earth and possibly harm us.

And as more satellites go up, so does the likelihood that they’ll interfere with astronomers’ views.

If Starlink continues to be a problem for these type of sky surveys, we may not have as much notice as we want to detect a near-Earth object and thwart it and prevent it from hitting Earth. Beyond detecting deadly asteroids, the wall of satellites could also obstruct the search for new planets or even black holes.

As for the 42,000 Starlink satellites adding to the already crowded field of space debris surrounding Earth, Dave Mosher, Tech Insider’s Senior Space Correspondent, says, “There’s a concern about space debris, because when you have so many satellites in the closest, tightest, densest orbits around Earth, there’s a higher chance that those satellites could collide with each other or with other satellites.”

Any time a satellite collides with another satellite it creates a cloud of debris that has the potential to orbit the Earth for centuries.

“And that debris can then disable or cause other satellites to crash into each other, creating even more debris, and this problem spirals out of control in an effect called the Kessler syndrome,” says Mosher. “And if we reach that, then essentially space is too unsafe to access.”

If Kessler Syndrome sounds familiar that’s because it’s named after one of the men whose warning I previously mentioned.

SpaceX has said its satellites can automatically move out of the way to avoid collisions. But dozens of SpaceX satellites are already disabled and can’t move at all, posing a potential threat. And those concerned with SpaceX’s plans are lobbying the FCC to rein in the company and more strictly regulate low-Earth orbit.

In addition to SpaceX, companies like Amazon, OneWeb, Telesat, LeoSat, Hongyan, and others are also planning to send their own satellites into orbit around Earth meaning, without some form of regulation, we could potentially end up with over 100,000 satellites circling our planet over the next 10 years.

Which brings up another, completely different problem, as Scientific American states, “With thousands more satellites set to enter orbit, actually communicating with a single one among those flying overhead could be difficult.”

So we could end up with tens of thousands of satellites in orbit around Earth that block astronomers’ views of potentially hazardous asteroids, restrict the study of space, make it more difficult to actually travel to space, and there’s a chance that many of them won’t even work properly because they are interfering with one another’s signals?

How soon do you think we’ll be able to move to one of those 24 “super-habitable” planets scientists have been talking about this week? Because, at this rate, it sounds like we’re running out of time.