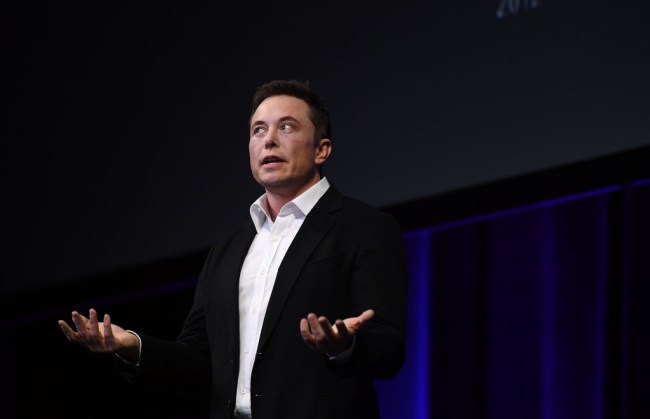 For some odd reason, Elon Musk enjoys riling people up on Twitter with sometimes bizarre tweets. He makes controversial comments despite being the CEO of Tesla and SpaceX and what he says online could hurt the stock price of his companies. Elon’s latest controversy is saying that artists shouldn’t be credited for their work online.

On Saturday, Musk posted a piece of artwork on his Twitter account with nearly 27 million followers with the caption of: “2b.” This was followed by a tweet of “wd b … 2 make real.” Both tweets have since been deleted.

Elon Musk reposted art and refused to credit the artist he stole it from. I really don't know how people genuinely like this man pic.twitter.com/wCPZ2hhCkM

Twitter user TodoNintendoS replied to Musk by saying, “credit the artist Elon. To which the Tesla CEO said, “No.” Then Elon said, “No one should be credited with anything ever,” which makes zero sense. He then followed it up with, “Always credit everyone.” Classic Elon.

The internet reactions lambasted the SpaceX entrepreneur for failing to properly credit the artist.

There are a lot of hardworking artists who pay their bills with their art. They take pride in it too.
”free exposure” that is uncredited doesn't help them, it harms them.

I'm just a random person, and I care whenever I see a random person repost art without credit. It's really not that far-fetched. Artists work their asses off and deserve to have that recognized and acknowledged.

Fuck Elon Musk. Dude has 27 mil followers, reposts someones art, and actively says "yeah no i won't credit them". He's the definition of an entitled, rich piece of shit who cant help the people who don't have nearly the same amount of clout.

Twitter asking Elon Musk Elon
to credit an artist for
their time and efforts pic.twitter.com/zwrGjxmQee

Haha it’s kind of easy if people want to find the artist they can reverse google search etc. Ppl lazy tho. Honestly? I think the greatest reward as an artist is to have ppl enjoy your art,💗maybe that’s why I’m poor haha. Anyway now the artist has great exposure thx to you!☺️

RELATED: The Way Comedian Chelsea Peretti Eats Cake Is Unholy And The Internet Justifiably Roasted Her

In the end, the internet delivered some justice because the real artist is now way more recognized than if Elon had just credited her to begin with. The artist is Meli Magali, who goes by the Twitter handle @MagaliProd. She replied by tweeting: “OMGGGGGG, IIITTSSSSSS MEEEEEE My account explodes. JUST THANKS A LOT ALL for protecting my art and for notifying me (Ps: Elon you’re not cool for haven’t credited me).”

OMGGGGGG, IIITTSSSSSS MEEEEEE 😱 My account explodes. JUSTE THANKS A LOT ALL for protecting my art and for notifying me 💙

It was only last July, that Elon Musk reached a settlement with a Colorado artist after the Telsa CEO used a cartoon image of a farting unicorn. Musk used Tom Edwards’ art to help promote his Tesla electric cars without attribution or payment.

Musk ignored licensing attempts by Edwards and his daughter online. “He can sue for money if he wants, but that’s kinda lame. If anything, this attention increased his mug sales,” Musk tweeted.

hey y’all Grimes’ boyfriend ripped off my dad’s art! this is a true story! what do you have to say for yourself @elonmusk ?? https://t.co/TMMJAS1ZGM

The billionaire eventually reached an agreement with Edwards. “It’s clear there were some misunderstandings that led to this escalating, but I’m just glad that everything has been cleared up,” Edwards wrote. “I’ve always been a Tesla fan, and I’m looking forward to getting back to making pots and selling them in my online store.”

Sales of the mug did spike in February 2017 after Musk tweeted a photo of the farting unicorn mug and said it was “maybe my favorite mug ever.” However, the following month, Musk used the image to promote Tesla’s new sketch pad feature and it appeared as an icon on the infotainment screen of the electric vehicles.

Musk was also tweeting memes of bees playing jazz on Saturday, so expect that Tesla stock to continue to be erratic like his tweets.

RELATED: IHOP Is Changing Their Name Again And The Internet Isn’t Here For It