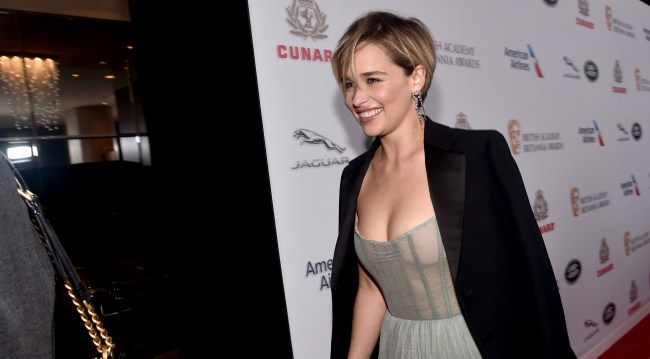 Emilia Clarke revealed a secret health battle in a new article she wrote which details how she almost died twice from brain aneurysms while shooting Game of Thrones.

As we head into the eighth and final season of the popular HBO drama, the woman who kicks ass in the key role of Daenerys Targaryen almost didn’t make it past season one.

“Just when all my childhood dreams seemed to have come true, I nearly lost my mind and then my life. I’ve never told this story publicly, but now it’s time,” Clarke began her story in the New Yorker.

She goes on to detail how she was feeling after Game of Thrones’ incredibly successful first season, and surprisingly, it wasn’t great.

I was terrified. Terrified of the attention, terrified of a business I barely understood, terrified of trying to make good on the faith that the creators of “Thrones” had put in me. I felt, in every way, exposed. In the very first episode, I appeared naked, and, from that first press junket onward, I always got the same question: some variation of “You play such a strong woman, and yet you take off your clothes. Why?” In my head, I’d respond, “How many men do I need to kill to prove myself?”

It was at that point in her career, unbeknownst to fans of the show, her health took a very bad turn for the worse.

On the morning of February 11, 2011, I was getting dressed in the locker room of a gym in Crouch End, North London, when I started to feel a bad headache coming on. I was so fatigued that I could barely put on my sneakers. When I started my workout, I had to force myself through the first few exercises.

Then my trainer had me get into the plank position, and I immediately felt as though an elastic band were squeezing my brain. I tried to ignore the pain and push through it, but I just couldn’t. I told my trainer I had to take a break. Somehow, almost crawling, I made it to the locker room. I reached the toilet, sank to my knees, and proceeded to be violently, voluminously ill. Meanwhile, the pain—shooting, stabbing, constricting pain—was getting worse. At some level, I knew what was happening: my brain was damaged.

For a few moments, I tried to will away the pain and the nausea. I said to myself, “I will not be paralyzed.” I moved my fingers and toes to make sure that was true.

Clarke had suffered a subarachnoid hemorrhage (SAH), a life-threatening type of stroke, caused by bleeding into the space surrounding the brain.

Scary enough, but then she found out that about a third of SAH patients either die immediately or shortly after suffering this type of aneurysm.

So, at just 24-years-old, Clarke had to undergo brain surgery. She spent days recovering in the intensive care unit, and while she was in the hospital she was told that she also had a smaller aneurysm on the other side of her brain and that it too could “pop” at any time.

For weeks, and while filming season two of Game of Thrones, Clarke still struggled with pain, dizziness and fatigue.

Embed from Getty Images
Clarke and her on-screen love Jason Momoa in 2013.

In 2013, when she went in for a brain scan to check on the other growth on her brain – had doubled in size, the doctors decided another operation was in order.

The surgery, which was supposed to be “relatively simple,” was most definitely not.

When they woke me, I was screaming in pain. The procedure had failed. I had a massive bleed and the doctors made it plain that my chances of surviving were precarious if they didn’t operate again. This time they needed to access my brain in the old-fashioned way—through my skull. And the operation had to happen immediately.

The recovery was even more painful than it had been after the first surgery. I looked as though I had been through a war more gruesome than any that Daenerys experienced. I emerged from the operation with a drain coming out of my head. Bits of my skull had been replaced by titanium.

This time Clarke spent a month in the hospital, but today she reports that she’s “a hundred percent” and as a result of her experience has helped start a charity called SameYou that will provide treatment for people recovering from brain injuries and stroke.

Read the entire incredible piece over at NewYorker.com.