Emilia Clarke Dressed Up As Jon Snow, Walked Around Times Square, And People Had ZERO Idea It Was Her 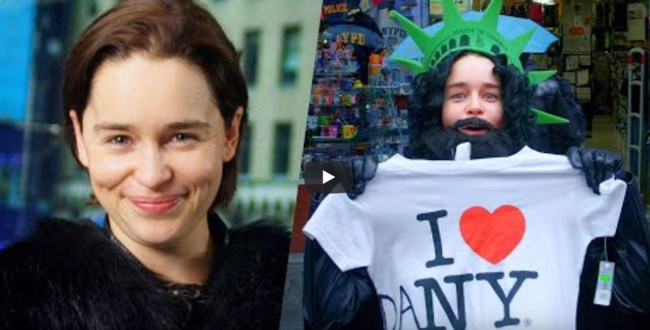 In March, Emilia Clarke revealed that in the early days of Game of Thrones she almost died, twice, as a result of brain aneurysms.

It was so serious that even all these years later, her GOT co-star at the time, Jason Momoa, still gets choked up talking about it today.

Luckily, Clarke survived and now says that she is “a hundred percent” good to go and as a result of her experience she helped start a charity called SameYou that will provide treatment for people recovering from brain injuries and stroke.

So, to help raise awareness, Clarke partnered with Omaze to give away a Game of Thrones’ fan’s dream prize: The Ultimate Game of Thrones Finale Party with Emilia Clarke.

The winner and three friends will be flown out to London and put up in a 4-star hotel, have a hilarious prop-filled photoshoot with Emilia to document your time together, and get to watch the series finale with a private screening.

Another bit of fun Clarke had in promoting this giveaway involved her dressing up as Jon Snow, walking around Times Square and having people be completely oblivious to the fact that one of the biggest TV stars in the world is standing right there in front of them.

She even did a little shopping while there, picking herself up a Jason Momoa Aquaman figure for “um, well, for later, really.” 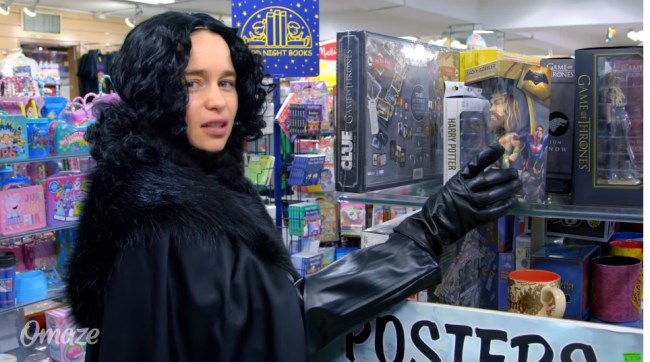 Watch and wonder how much the people in this video are kicking themselves right about now for their disinterest in that Jon Snow cosplayer they saw bumping around Times Square awhile back.

Oh, and enter to win (and support a great cause) here.