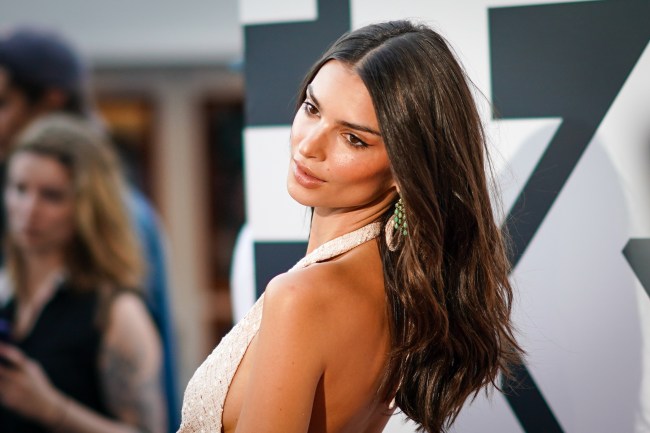 Emily Ratajkowski, despite having physical features that are superior to the rest of the human race, is a normal person just like you and me. What I mean by that is that EmRata is a hair over a year into her marriage and she’s already letting herself go. Before long she’s going to be farting in bed, cutting off ties with the in-laws, and promising that she and her personal trainer, Chet, are “just friends.”

Ratajkowski has been featured in the September 2020 edition of Harper’s Bazaar where she writes an essay titled, “Emily Ratajkowski Explores What It Means To Be Hyper Feminine.”

In summary, the article says that she doesn’t need to abide by your antiquated stereotypes of beauty you goddamn neanderthal. Now go eat a steak and jerk off to a World Star video, you uncivilized swine.

The accompanied feature photo is below.

In the essay, Ratajkowski writes:

On any given day, I tend to like to shave, but sometimes letting my body hair grow out is what makes me feel sexy.

Seeing arguably the sexiest woman in the world with Don King’s hairpiece under her arm simply did not compute for a large chunk of Emily’s following who only scroll through her feed with a sock around their bedroom doorknob.

The responses of dude in the PITTS about it are highly entertaining.

@emrata I'm sorry but fuk off.
Even your own followers are just fed up of your madness. U got into an industry to look pretty n show your tits. Stick to what you're good at. #liberalinsanity #eventhewomenarescared pic.twitter.com/8kfDqNc45D

Who hurt you, Shay?

Then untie the belt from your neck put the pack of Kleenex back in your mother’s purse.

Define Normal. (I saw that on an obese person’s shirt at Disney Land)

“Don’t cry because it’s over, smile because it happened.”

African Blood out here acting like he’d turn EmRata down if she grew a beard and an Adam’s apple and changed her name to Bill.

I don’t want to go too hard on these guys because I’m old fashioned in that I’d choose smooth and silky over Questlove in a headlock, but I’m sure any woman would prefer I don’t binge drink four nights a week and fall asleep with one shoe on. We all must accept the love we think we deserve. No more, no less.