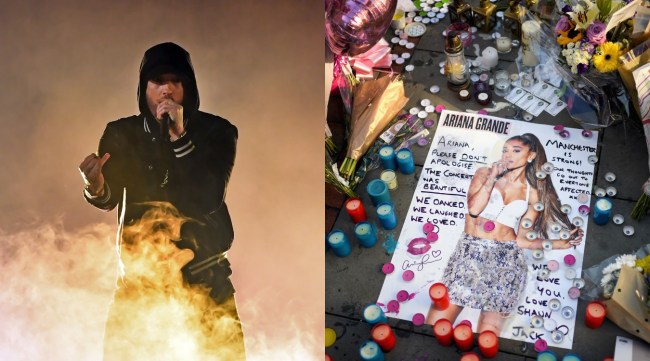 At the stroke of midnight on Friday, January 17, iconic Detroit rapper Eminem released a surprise new album, Music To Be Murdered By, and it includes some traditionally controversial Slim Shady lyrics.

“I’m contemplating yelling bombs away on the game like I’m outside an Ariana Grande concert,” he raps.

In addition to the 23 dead, the Manchester Arena Bombing — carried out by then 22-year-old Islamic extremist Salman Ramadan Abedi on May 22, 2017 — resulted in over 139 wounded, with “more than half” of them being children.

not eminem saying "but im contemplating yelling bombs away on the game like im outside an ariana grande concert" 😐😭 pic.twitter.com/aIDrg35TOC

This certainly is not the first time that Eminem has caused controversy with his lyrics, as contentious content has been an integral part of his brand and identity ever since he burst onto the scene in the late 1990s with his first two studio albums, The Slim Shady L.P. and The Marshall Mathers L.P.

For example, The Mashall Mathers L.P. — arguably Eminem’s most revered album — includes the track “Kim”, which is essentially a six-minute-long murder fantasy that details Mathers killing his wife Kim Scott. However, that album came out almost 20 years ago, prior to the invention of social media.

At the time of this writing — about 1 a.m. EST — Ariana Grande has yet to publicly respond to 47-year-old’s incendiary lyrics.

You can stream all 20 tracks on Music To Be Murdered By below: