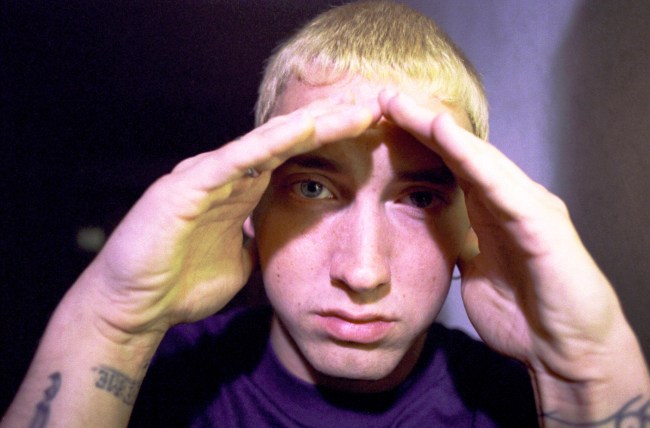 Marshall Bruce Mathers Jr., the biological father of Eminem, has passed away in Fort Wayne, Indiana, according to family members who spoke to TMZ.

Mathers, who went by “Bruce,” reportedly suffered a heart attack while at home. He was 67.

Eminem’s mother, Debbie, claims that Bruce married her when he was 22 and she was just 15, and that two years later, one of the greatest musical artists to ever live was born. The two divorced shortly and Debbie and her son settled in Detroit while Bruce peaced out to California to father two other children and work as a construction worker.

Eminem claimed to have written letters to his father as a child, but they would come back marked “return to sender.” After his son rose to international fame, Bruce reached out in a letter published by Mirror claiming that Debbie manufactured the narrative that Bruce was a drunk and a drug addict who walked out on the family, but instead that she up and left town with Em without even leaving a note. He claimed that he had a great relationship with his other two kids and his life mission was to repair the relationship with his first son.

“I don’t need or want your money,” he wrote. “But the one ambition left in my life is to give you a hug and tell you I’ve always loved you.”

That letter was written 17 years ago, and Bruce never got that moment.

““I heard my dad is trying to get in contact with me, but not now. I never got one letter,” he told The Mirror. I never got anything from him and I think he could have at least tried to write. He could have done something — made an effort.”

Eminem’s disdain for his father is well-documented in his music. In 2002’s Cleaning Out My Closet, around the same time Bruce published the letter, Eminem didn’t mince words in revealing how he felt about his father.

“My f*ggot father must have had his panties up in a bunch/ ‘Cause he split, I wonder if he even kissed me goodbye/ No I don’t, on second thought I just fucking wished he would die/ I look at Hailie, and I couldn’t picture leaving her side.”

At the time of this writing, Eminem has yet to address the death of his father on social media or otherwise.