A Timeline History Of The Feud Between Eminem, Mariah Carey And Nick Cannon 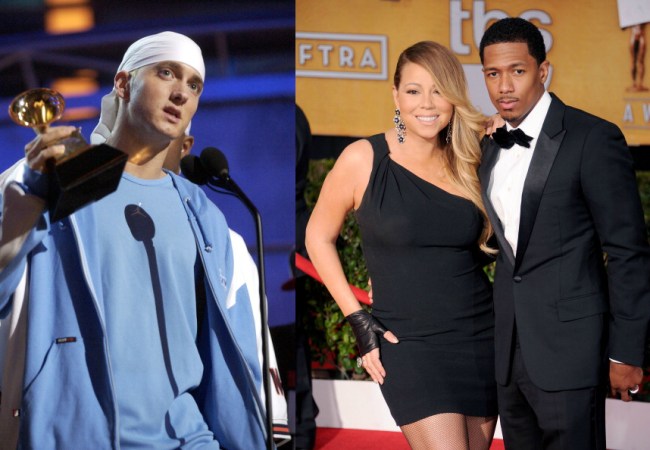 The feud between Eminem and Mariah Carey has been going on since 2002. While it looked like the squabble had been squashed, Slim Shady reignited the flames of animosity with a new diss track about the songstress and her ex-husband Nick Cannon.

In 2001, Mariah Carey allegedly met up with Eminem to discuss the possibility of a collaboration on her 2002 Charmbracelet. Eminem has alleged that after the meeting, the two celebrity artists dated for six months, a claim that Mariah has always denied.

In 2002, Eminem first mentioned Mariah in a song. Superman off his fourth studio album The Eminem Show, Eminem rapped: “What you tryin’ to be, my new wife? What you Mariah? Fly through twice.”

Also off 2002’s The Eminem Show is When The Music Stops, where Eminem rapped: “I done came way too far in this game to turn and walk away, and not say what I got to say. What the f*ck you take me for a joke? You smokin crack? Before I do that, I’d beg Mariah to take me back.”

But in a 2002 Larry King Live interview, Mariah Carey denied she was with Marshall Mathers. “I hung out with him, I spoke to him on the phone,” she told Larry King. “I think I was probably with him a total of four times. And I don’t consider that dating somebody.”

The same year, she told Maxim that there was no “sexual relationship” between her and Marshall.

Then in 2003, Mariah responded with her own diss track of sorts. On her song Clown, Carey said: “You should’ve never intimated we were lovers / When you know very well we never even touched each other.”​

In 2005, during Eminem’s Anger Management Tour, audio was played that was allegedly voicemails from Mariah Carey. “Why won’t you see me? Why won’t you call me?” the person in the unconfirmed audio said.

Eminem’s obsession with Mariah Carey continued in 2006 when he rapped about her Jimmy Crack Corn.

“Your mind’s on us like mine’s on Mariah / And y’all are just like her, you’re all f*cking liars / But I’ll just keep f*cking you like I f*cked her / Right in the ass with KY yes sir,” Eminem said on The Re-Up compilation track.

In 2009, Slim Shady released Bagpipes from Baghdad that reignited the Em’s bitterness towards Mariah after she got married to Nick Cannon in 2008.

“Nick Cannon, I wish you luck with the f*cking whore,” Eminem said on the Relapse track.

This is the point where Nick Cannon got involved with the Eminem-Mariah feud. Cannon wrote a blog post, which was quickly deleted, that lambasted Slim Shady.

“A mediocre (at best) Eminem record that sounds like it was written in 2001,” Cannon wrote. “At first, I thought it was old material that had been dug up from when dude ‘fantasized’ about having a pretend fling with Mariah. … But all of a sudden I hear my name in the verse! My first reaction was like, ‘This is his new sh–? Wow, that’s too bad.'”

Cannon alleged that Eminem’s insults were racially motivated, despite Em being the one who wanted to publicize their relationship.

“Maybe I’m going too far, but I thought we got past the days where white men could spew vulgar obscenities at our beautiful queens and get away with it,” Cannon stated. “What’s next? Are we going to let this trash say something horrible about our lovely first lady, Mrs. Michelle Obama? Or would Marshall have talked sideways out of his neck like this about Oprah Winfrey? This act of racist bigotry cannot go unnoticed. Calling my wife a ‘c—‘ and a ‘whore’ is way worse than anything Don Imus could have ever said. So trust, repercussions will be served. Anybody got Al Sharpton’s number?! LOL Let’s not forget about Eminem’s amateur mixtape rants of calling African Americans ‘ni—-‘ and how he hates ‘black bi—es.’ ”

“So, Miss Marshall, I’m going to make you wish you never spoke my name and regret the ungodly things you said about my wife,” Cannon continued. “This is going to be fun! It’s however you want it! Just remember, you did this to yourself! Your legacy has now been tainted from this day forth! You will now be known as the rapper who lost to corny-ass Nick Cannon!”

Mariah responded by releasing her song titled Obsessed with the lyrics: “Why are you so obsessed with me? Lying that you’re sexing me?” The music video featured a stalker in a very Eminem-like outfit.

Eminem really laid into Mariah Carey in his scathing 2009 track The Warning, where he threatens to leak intimate voicemails and pictures from their past relationship.

Only reason I dissed you in the first place
is because you denied seeing me
Now I’m pissed off!…
Sit back homey relax, in fact grab a six-pack
kick back while I kick facts
Yeah Dre sick track
Perfect way to get back
Wanna hear something wick wack?
I got the same exact tat that’s on Nick’s back
I’m obsessed now
Oh gee, is that supposed to be me in the video with the goatee?
Wow Mariah, didn’t expect you to go balls out
Bitch shut the fuck up ‘fore I put all them phone calls out
You made to my house when you was Wild’N Out before Nick
When you was on my dick
And give you something to smile about
How many times you fly to my house? Still trying to count
Better shut your lying mouth if you don’t want Nick finding out
You probably think ’cause it’s been so long…

In 2016, Cannon released his own diss track I’m A Slick Rick. The song rapped in the style of legendary rapper Slick Rick took shots at Em.

“Yo, I’m a serve this clown now word nick word / I don’t know if I should cause he’s feminine slick / Excuse me, Eminem, why you lying on your d*ck? / Erectile dysfunction,” Cannon raps.

Around the same time of I’m A Slick Rick, Cannon challenged Slim Shady to a boxing match. In the now-deleted Facebook post, Cannon wrote: “The time has come! Boys talk the talk, but men walk the walk. Nick has laid down the challenge to meet Eminem in the ring.”

In September 2019, Cannon appeared on T.I.’s ExpediTIously podcast where he talked about wanting to fight Marshall Mathers.

“Think about it…I think we was flying on a jet from Africa or somewhere. And this motherf*cker drops a song talking sh*t,” Cannon said of Eminem and his The Warning diss track about his then-wife Mariah Carey.

“Calling [Carey] all types of bitches and hoes, I’m like, ‘This my wife. My new wife,'” Cannon said on the hip-hop podcast.

“I went looking for him, I called managers,” claimed Cannon, who divorced Carey in 2016. “I gotta show my wife I’m a man…I said, ‘I know I’m not gonna be able to out rap you, but I will whoop your ass.’ Those were the exact words at the time. Cooler heads prevailed.”

In December of 2019, Fat Joe released the Family Ties album, which featured various artists such as Cardi B, Mary J. Blige, Lil Wayne, and Eminem. On Slim Shady’s track Lord Above, the legendary rapper reignites the feud that had been dormant for a decade.

In the track Lord Above featuring Fat Joe, Mary J. Blige, and Eminem, Slim Shady attacks Nick Cannon and MC with harsh words about their relationship.

Word to the Terror Squad, Joe, this is all puns aside though
I know me and Mariah didn’t end on a high note
But that other dude’s whipped—that pussy got him neutered
Tried to tell him this chick’s a nutjob ‘fore he got his jewels clipped
Almost got my caboose kicked
Fool, quit, you not gon’ do shit
I let her chop my balls off too ‘fore I lost to you, Nick
I should quit watchin’ news clips, yeah

Post Malone Says He And Mac Miller Were Going To Make A Joint Album, Talks About Collabo With Eminem