MJ Vs. Slim Shady: Why Did Michael Jackson Buy The Rights To Eminem’s Music? 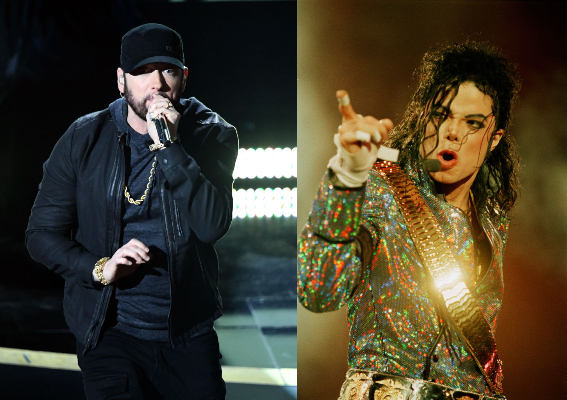 There have been many beefs between music superstars throughout history, but one of the more bizarre conflicts is the one between Michael Jackson and Eminem. The animosity between the King of Pop and Slim Shady reached a fever pitch when MJ bought the rights to Eminem’s rap music.

The lyrics of Just Lose It feature damning accusations that could be targeting Michael Jackson, and his child sexual abuse allegations.

Come here little kiddies, on my lap
Guess who’s back with a brand new rap
And I don’t mean rap, as in a new case
Of child molestation accusation aah aah aah aah aah
No worries, papa’s got a brand new bag of toys
What else could I possibly do to make noise, I done touched on everything
But little boys
And that’s not a stab at Micheal, that’s just a metaphor
I’m just psycho
I go a little bit crazy sometimes
I get a little bit out of control with my rhymes

Jackson took offense to the lyrics that seem to attack the King of Pop’s character, and even attempted to get the music video pulled off television channels that played music videos.

“I’ve admired Eminem as an artist, and was shocked by this,” Jackson told KKBT-FM radio personality Steve Harvey in 2004. “The video was inappropriate and disrespectful to me, my children, my family and the community at large.”

“I am very angry at Eminem’s depiction of me in his video,” Jackson said. “I feel that it is outrageous and disrespectful. It is one thing to spoof, but it is another to be demeaning and insensitive.”

“I’ve never met Mr. Eminem, and to have – I’ve always admired him – and to have him do something like that has been pretty painful,” Jackson said in another interview.

At the time, Jackson’s estate announced legal action was being considered. Black Entertainment Television stopped airing Eminem’s Just Lose It at the request of MJ.

“BET pulled the video because we feel it is inappropriate to use our network to air a video disparaging Michael’s character, or that of any other celebrity,” said BET’s chairman and founder, Robert Johnson.

In 2007, Michael Jackson seemingly exacted his revenge on Eminem and the Thriller singer purchased the publishing company Famous Music for $370 million, which owned the rights to Marshall Mathers’ back catalog.

The beef between MJ and Slim Shady is explained in the YouTube video titled “Michael Jackson Vs Eminem: What REALLY Happened?”