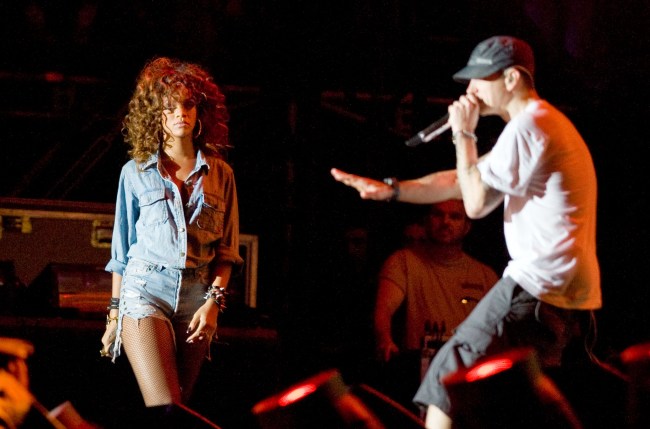 Last week, a previously unreleased snippet of a song featuring Eminem siding with Chris Brown following the domestic violence case with Rihanna leaked. Now, Eminem’s entire never-released track has come out, and the rapper’s rep has addressed the lyrics.

Eminem was on 2011 B.o.B. song Things Get Worse, and his original verse trashed Rihanna. “I’m not playing Rihanna where’d you get the V.D. at? Of course I side with Chris Brown, I’d beat a b*tch down too, if she gave my d*ck an itch now,” Eminem rapped. There was no mention of Chris Brown or Rihanna in the final version of the song. Chris Brown assaulted Rihanna in February of 2009, and he was found guilty of felony assault but avoided serving any jail time.

In the never-released verse that was first leaked on Reddit, Eminem also rapped that he “murdered” a 16-year-old Dakota Fanning, and “put Natasha Bedingfield in a washer.” Eminem also dissed Angelina Jolie, Jessica Simpson, Carmen Electra, and his mother in the song.

“This is a leak of something that’s over 10 years old,” Dennehy told XXL. “After Eminem recorded it, he scrapped it, and rewrote it. Obviously he and Rihanna have a great relationship.”

Eminem and Rihanna have collaborated on several songs since Eminem rapped the lyrics against the R&B singer, including Love The Way You Lie, Numb, and The Monster. The two music artists performed together on the Monster Tour in 2014.