Eminem Is Reportedly ‘Stressed Out’ About Mariah Carey’s Upcoming Autobiography 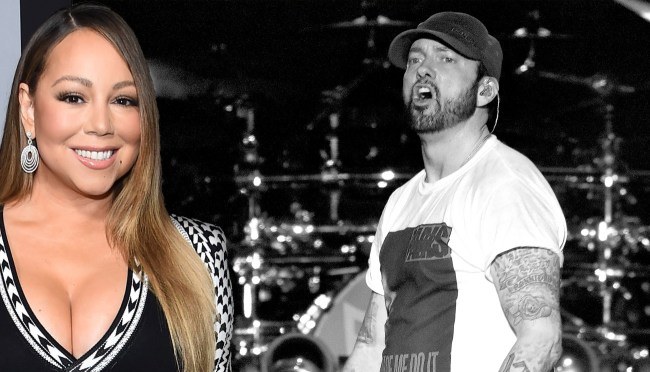 A few weeks back legendary singer Mariah Carey revealed that she had just finished writing her memoir. (What’s the difference between a memoir and an autobiography? Oh, one is about the person’s whole life while the other is about a specific time period in one’s life. Good to know. I wonder if Mariah knows the difference, because how she describes it sounds more like an autobiography. Sorry, got lost in my own thoughts there for a minute.)

“Though there have been countless stories about me throughout my career and very public personal life, it’s been impossible to communicate the complexities and depths of my experience in any single magazine article or a ten-minute television interview,” Carey wrote about the book on Instagram.

📖 Delivered! "I have learned that beauty has to flourish in the light" 🦋

“This book is composed of my memories, my mishaps, my struggles, my survival, and my songs. Unfiltered,” Carey added.

Which is reportedly exactly what has Mr. Marshall Mathers III in such a tizzy these days.

“Eminem’s Achilles heel has always been Mariah Carey,” a source told Us Weekly. “They had a very toxic relationship. He knows that Mariah is going to say very negative things about him. He is expecting the onslaught, and almost welcomes it.”

If nothing else, should she decide to bash Eminem we can expect at least one new song addressing it, this much is guaranteed.

Who will ever forget these lyrics to Eminem’s song “Lord Above”?

I know me and Mariah didn’t end on a high note
But that other dude’s whipped, that p*ssy got him neutered
Tried to tell him this chick’s a nut job before he got his jewels clipped
Almost got my caboose kicked, fool, quit, you not gon’ do sh*t
I let her chop my balls off, too ‘fore I lost to you, Nick

The insider continued, “Marshall is stressed out that Mariah is going to say sh*t that he was bad in bed or a selfish lover because he has always been very insecure about that. She knows that.”

Hmmm… the source calls him Marshall. Must be someone close.

Related: A Timeline History Of The Feud Between Eminem, Mariah Carey And Nick Cannon

It will be interesting to see if Mimi does mention Em in her memoir because for the longest time she’s claimed they never dated.

Which would be weird considering another Eminem song, “The Warning”, was reportedly released in response to Carey’s single “Obsessed”, a song about an obsessed man who claims to be having a relationship with her.

Only reason I dissed you in the first place
Is because you denied seeing me
Now I’m pissed off!…
Sit back homey relax, in fact grab a six-pack
Kick back while I kick facts

Man, I really hope she does go into detail about her relationship with Eminem in her book. Heck, even if she just alludes to it we will probably get a new track from Slim Shady out of it. Can’t wait.