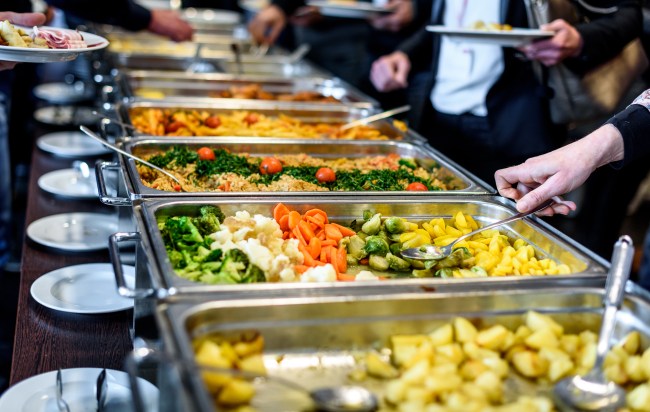 Little did we know that some vile, lung-thirsty bug was going to show up in America and change our way of life for what seems like forever. But, like it or not, that’s precisely what’s going down. Shit’s never going to be the same. We are now a nation of couch grinding alcoholics with no jobs, no money and an economy that, if you had to paint a picture of it, would look like some old eunuch holding up a cardboard sign that says, “Will work for a vaccine.” Fucking-A, it’s a mess out there, and as much as it pains me to admit it, we may be in for a long haul before we, as a nation, ever truly get back to some semblance of normalcy. I mean, there’s already the threat of a vegetarian summer! The only thing worse than sitting around the backyard grilling up turnips and shit is if we were to exist at a time when we can no longer get drunk and stoned and then gorge ourselves to near death at an all-you-can-eat buffet. Well, this just in, boys, we have officially entered the next circle of Hell. We may have seen the last of this American classic.

The latest casualty of the health crisis that’s been beating the ever-living snot out of our pursuit of happiness is the buffet. While restaurants, as a whole, have been forced to alter their operations to protect their customers and communities, the pop staple we know as the smorgasbord is on its last leg. Buried in the fine print of the latest federal health recommendations, the heavy hand of our Uncle Sam is calling for “salad bars, buffets, and beverage service stations that require customers to use common utensils or dispensers” to be discontinued.

It means we’re not going to be waking up hungover on Sundays anytime soon and stuffing ourselves stupid with egg rolls and General Tso’s Chicken. And so much for getting the munchies and trying to put places like the Golden Corral out of business. Gluttony at $13.99 a pop has reached its end.

Although the impending demise of the buffet might be painful for some folks to swallow, you nasty bastards have to know that we had it coming. Anyone who has ever frequented one of these slop-n-feeds needs to understand that we’ve been eating in less than sanitary conditions for a long time. Not only is the food fit solely for second class citizens, everyone and their drooling grandmother is over there handling the same tongs and sampling with their bare hands. Meanwhile, kids are dipping their booger-picking fingers in the mashed potatoes, and there is always — and I mean always — some sick fuck on a Rascal scooter hacking up a lung next to the dessert bar.

We often criticize other cultures for ingesting diseased animals that may have doomed us all to the uncertainty of this isolation period. But, truth be told, it’s a goddamned miracle that the entire population hasn’t already been rendered extinct because of some wicked plague that was Frankensteined together by the sneeze guarded of a buffet table. We’ve been chowing down so close to death for so long that we’re utterly oblivious to the danger. Let it be known: Buffets are the Petri dishes of the culinary world, and it’s about damn time that they were put down. I mean, how much shrimp cocktail does one man really need? Is it actually necessary to have four pork chops and the steak?

Still, some of us are going to miss lining up at the trough like filthy animals. After all, buffets have been a part of our red, white and blue culture since the 1940s. That’s when some casino mogul in Las Vegas borrowed the idea from the Swedes and unwittingly launched a madhouse trend that has been part of the daily lives of geriatrics, veterans and stoners for decades. So, it stands to reason that lovers of overcooked green beans, all-you-can-eat crab legs and 10,000 variations of pizza are going to be a little disappointed that communal chow halls aren’t going to be very popular for a while. At least not until science catches up with this bug and figures out how to squash it from the face of existence — something that could take as many as 18 months, maybe less if the lead researcher happens to be a loyalty card member at their neighborhood Shoney’s.

And by then, who knows. Maybe the American fatso will be so adjusted to all of this confinement, curbside service and other amendments to their perceived notion of normal that they may never want to hit the old Jimmy Buffet ever again. Perhaps all America needs is some time to become more sensible about their dining habits, to mature and learn that mealing down alongside nose pickers and other questionable specimens of our sicko society is no way to live.

But considering the idiocy that has come oozing out of the pores of the nation since this whole diseased debacle began, we’re betting against that – big time. No, our money is on the overindulgence mentality and the capitalistic creature with an unwavering desire to give the people what it wants. And by God, they have no fucking clue what that is, which is the whole reason we’ve been able to get lasagna and sushi at the same place. It has been said that the all-you-can-eat buffet is just Americans enjoying their freedom, a way of living the nation’s go-big-or-go-home philosophy on the beer-battered, cheese-smothered wings of type-2 diabetes. Some of us, however, have learned to read a menu. We prefer quality to quantity, and feasting on the same bacteria-infested pseudo-cuisine as hundreds of people with knuckle herpes, well, that’s not it.