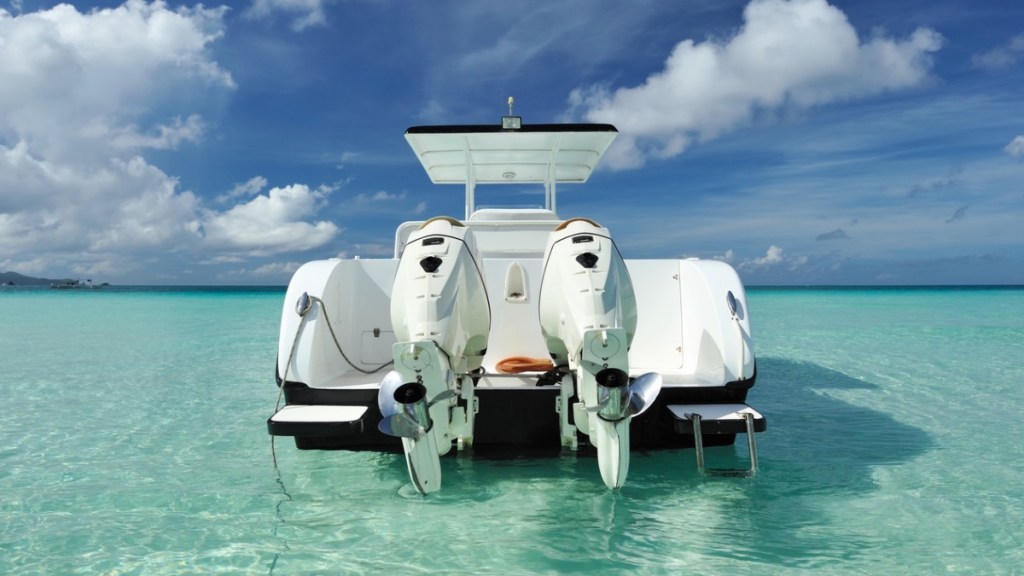 He says when they arrived at the Panama Canal after their journey from Florida, the canal agent who’d worked there for 40 years laughed in their faces. Never in his 40 years of working the Panama Canal had he met anyone crazy enough to take a center console boat from Florida all the way there.

The boat trip of a lifetime…in a Center Console?!

A long ride in a center console is rough. Your legs and glutes get sore from the constant standing, stabilizing, and battering of the waves.

Friends of mine with center consoles able to cover a few hundred miles often do trips from my hometown to the Florida Keys by themselves and have their families fly down. Or from the East Coast of Florida to The Bahamas, they’ll ride over with two people on the boat and the rest will fly. You NEVER hear about any traveling a thousand miles in a center console let alone 2,400 miles!

The trip began in my hometown of Sarasota, Florida. From here they rode to Isla Mujeres which is a picturesque island just off Cancun with a cool sea turtle sanctuary and a hostile with cheap beer, at least that’s my memory of it from a few years back.

From Isla Mujeres, Mexico they rode to Honduras and from Honduras to Panama they entered ‘pirate waters’ when going ‘around the horn’ of Honduras and Nicaragua. It’s an area that’s notorious for modern pirate activity where small crews in high-speed pangas will run up on unsuspecting sailboats or slow-moving crafts too close to shore and rob them.

You’ll have to scroll through the Instagram gallery, but the boat’s owner Mat Wood tells a wild story of a panga coming out to try and stop them but they just gunned the throttles and took off.

Story of their 2,400-mile journey from Sarasota, FL to the Pacific coast of Panama

The boat they took was a 40′ High Performance Cat made by Barker Boatworks. It has a fuel capacity of 770 gallons but they were also running with a few fuel bladders on board.

Not many center consoles can say they’ve traveled on their own bottom 2,400+ miles from Sarasota, FL to Papagayo, Costa Rica and lived to tell about it. Below is a excerpt from Barker 40HPC and @viridian_experience owner @whisky_water24 ‘s recap from this trip of a lifetime.

“I took delivery in Sarasota Florida and spent the next 30 days driving her down through the Panama Canal and up to the pacific side of Costa Rica. She did really well considering the distances (Roatan to San Andreas was 480 miles, Key West to Isla Mujeres 380). We got beat to hell as any center console would but the boat performed spectacularly. In addition to the 800 gallon tank we had 2 – 100 gallon bladders built into the deck and another 250 gallon bladder on deck. It was windy season and we sat on Isla Mujeres for a week waiting out 8 foot seas but really didn’t have any issues until the Honduras/Nicaragua “pirate coast”. (Swipe to hear a excerpt of @piraterob505 ’s colorful commentary from the encounter).

The agent at the canal that has worked there for 40 years swears no one has ever been dumb enough to drive a CC down from Florida through the Canal. Either way, I won’t be doing it again but am glad we did. All told, I am convinced the Barker 40’ Cat is the baddest fishing center console on the planet and I foresee those guys selling a lot more of them in the coming years.”

They made it. 2,400 miles later, they were probably the first people in history to take a center console from Sarasota, Florida through the Panama Canal and up to Papagayo, Costa Rica.

The 40′ Center Console’s Now At Home In Costa Rica

This is a PERFECT fishing boat for the Pacific Coast of Costa Rica. Look at this thing just gliding through the water like a knife cutting through butter:

If you didn’t before, go back and scroll through the Instagram gallery above. He tells the story of booking it across the Gulf of Mexico from the Florida Keys to Isla Mujeres, running from pirates, and then crossing the Panama Canal.

Sitting at the restaurant on the Miraflores Locks on the Panama Canal is some incredibly fun boat watching. I was once eating lunch there and saw one of my best friends riding through on a freighter ship on his way to southeast Asia. You never know what you’ll see, but I’m certain nobody expected to see a center console from Florida cruising through alongside the big ships.

Here’s a look at the Barker Boatworks 40 HPC in action:

That boat has literally everything you’d want for a long-distance journey aside from being a pretty rough ride compared to a sailboat or yacht. If you’ve got around $1.149 million in the bank to spend on a boat, you can find some used on the secondary market!

Pirate activity off the Honduran coast is a very real concern

For years now, there has been a rise in pirate activity off the coast of Honduras. Ultimately, the safest course of action is to stay as far away from the coast as possible.

Pirates typically use small, fast boats. So slow-moving vessels like sailboats are at heightened risk compared to a center console boat like this one that could rip it at up to nearly 80 MPH.

There are a few long vlogs on YouTube about sailors avoiding pirate encounters near Honduras:

In the instance of these guys in the center console headed to Costa Rica from Sarasota, Florida what they found out is they jumped the gun… They were so worried about pirates they actually booked it running from the Honurdan Navy and it wasn’t pirates to begin with.

They’re lucky they got out of there with their boat!