ESPN UFC Commentator Megan Olivi ‘Made A Point’ To Talk To Stephen A. Smith Before UFC 264 Broadcast Months After She Was ‘Hurt’ He Excluded Her From Tweet 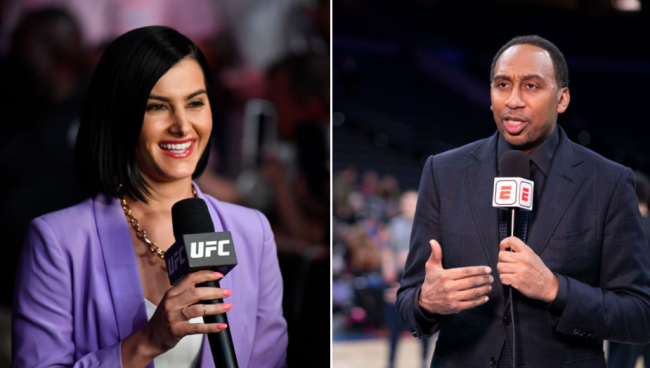 Megan Olivi “made a point” to talk to Stephen A. Smith before this weekend’s UFC 264 broadcast after some behind-the-scenes drama a few months ago.

Back in April during UFC 261, Smith praised several people on ESPN’s UFC coverage team in a tweet that excluded Olivi.

Forgive me for bragging, but we’ve got the best @ufc coverage in the world on ESPN+. Ya got @dc_mma, @joerogan & @Jon_Anik cage side. @ChaelSonnen & @bisping providing color. My bro @michaeleaves Hosting post-fight coverage and @bokamotoESPN & @arielhelwani always on scene.🔥🔥🔥

Olivi took offense to Smith’s snub and said she was “genuinely hurt” that she was not praised alongside her male colleagues.

“That was actually tough for me,” “I don’t love social media in general, but then to play such a big role in terms of pre-and post-fight interviews, like, I’m the one onsite doing them. Then to do all the hits on the broadcast and be a part of this team and literally the only women on the pay-per-view team – there’s no other desk host, there’s no one on the pre-or post-show. It’s literally just me. And I’ve worked to be here. I wasn’t handed this. It’s been a very long journey, as people who have seen me 10 years ago I’m sure can attest to. I’ve done everything the right way to get here, and to not get the acknowledgment as my male colleagues got, I genuinely was so hurt. It was nice to see the MMA community have my back on that.”

On Friday during UFC media day, Olivi says she made a point to talk to Stephen A prior to the broadcast. Olivi says they had a nice chat and Smith was apologetic about leaving her out in the tweet back in April.

UFC commentator Megan Olivi says she made a point to talk to Stephen A Smith before UFC 264 broadcast months after she said she was "hurt" he left her out in a tweet praising ESPN’s UFC coverage pic.twitter.com/azVduif2IQ

“I made a point to go talk to him the other day and we had a really lovely conversation…you know he has a lot of jobs so he maybe doesn’t get to see everything as closely as other people who cover the sport or who are big fans of the sport, he was so kind and completely took it upon himself to be like hey, it’s my bad and made it very clear hes not a UFC expert, he’s not somebody who gets to watch a ton of content, he was super nice but I wasn’t going to let us work a broadcast together on Saturday without making sure I went in there and had a great chat.”