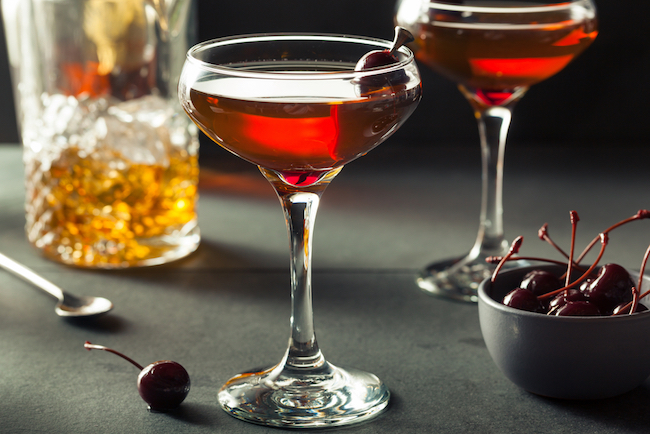 As you’ve probably guessed from all of the people dressed up as bottles, parades filled with Scottish bagpipers, and people singing carols about bourbon, today is International Whisk(e)y Day, which is a great excuse to drink in addition to raising awareness (and funding) for good cause.

To celebrate, I put together a list of four essential cocktails you should have in your repertoire if you want to be able to act like you know what you’re doing behind a bar. If you’re looking for a whiskey to use, you might want to check out the list of the best ones from the past year, but if you can’t get your hands on any of those, a pretty modest bottle should do for all of these.

As far as I’m concerned, the Manhattan is the standard of whiskey-based drinks. In it’s simplest form vermouth and bitters are added in various ratios, but here’s the most common:

Put the ingredients in a glass with ice and stir for around 20 seconds before pouring into a martini glass (it can also be served over the rocks if you’re into that kind of thing). I’ve seen it garnished with an orange peel, but it should be served with (ideally a couple) Luxardo cherries.

Ryan Gosling makes these with Pappy Van Winkle like it’s no big deal in Crazy, Stupid, Love, but I’d suggest you use something a little more modest when making this. You’ll need:

Muddle together the sugar and bitters until they’re well-combined. Use the largest ice(s) possible to fill the rocks glass and rub the rim with the orange slice. Add the whiskey and twist the slice over the drink to release additional juices (you can use a lighter when you do this to up the “awe” factor). Garnish with the peel and add another one of the Luxardo cherries you’ve developed a craving for since trying your first.

This one might not be as iconic as the previous two drinks, but the mint julep is basically the only cocktail that has a day of the year people actually celebrate. It’s sad that we need an excuse to get drunk and wear funny hats, but thanks to the Kentucky Derby falling on the same day as Cinco De Mayo this year, plenty of people will do both.

This requires you to actually go to a store and get fresh ingredients (or use the internet to pay someone to do that for you), but it’s worth it if done right. Here’s how to make it:

Muddle the mint and sugar in a large glass (basically anything they give you when you order a pitcher of beer will do). If you don’t have crushed ice on hand, put some cubes in a folded kitchen towel and beat the shit out of them with your blunt object of choice. Add it to the glass with the bourbon and garnish with a sprig of mint to make it seem like you have class. Have a Luxardo cherry just for the hell of it.

The Irish coffee is the perfect drink of choice for chilly weather, drinking discretely in the morning, and telling yourself alcohol can help kill the germs causing the cold you have. The Dead Rabbit— which now has its own whiskey— was nice enough to share its secret, but I have a slightly simplified version I rely on:

Pour some coffee into a mug and add whiskey, compensating with more coffee when you go overboard with the booze. No one said making your own drink had to be complicated. Make and repeat until you’re eating Luxardo cherries with a spoon living like a king truly should.