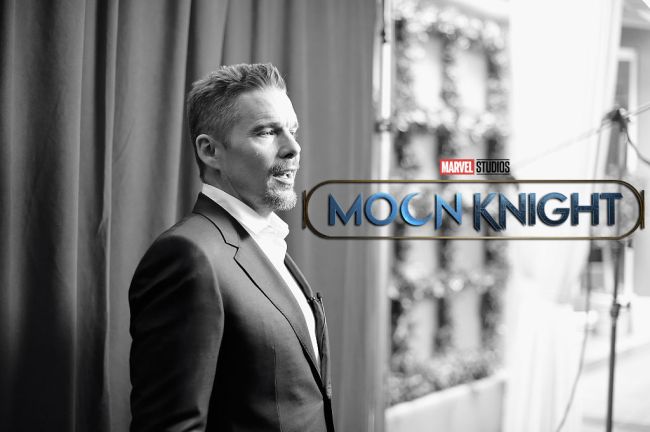 Arguably the most underrated A-list actor of his generation is finally making a foray into the Marvel Cinematic Universe, as reports indicate four-time Academy Award nominee (twice for acting and twice for writing) Ethan Hawke has been cast in Moon Knight.

While Hawke’s character has not been revealed, The Hollywood Reporter reports that Hawke will be playing the primary antagonist opposite Oscar Isaac’s titular Moon Knight, a.k.a. Marc Spector. As THR states, Moon Knight’s archnemesis in the comics is a villain named Bushman, “a fellow mercenary who turned on the hero when Egyptian gold came into the picture.” Moon Knight will also mark the first time Hawke has starred in a comic book project during his 30+ year-long career.

Moon Knight has had several incarnations over the decades since his debut in 1975, from being an ex-Marine turned mercenary with multiple alter egos to being a conduit for the Egyptian moon god Khonshu, to, most recently, a dapper consultant. In the modern comics era, one them of the story has been the character’s struggle with multiple personality disorder.

Mohamed Diab, the Egyptian helmer behind Middle Eastern drama Clash, and Justin Benson and Aaron Moorhead, the indie filmmaking team behind sci-fi horror movies The Endless and Synchronic, are directing the show. [via The Hollywood Reporter]

At this time, Moon Knight is currently scheduled to begin production in Budapest in March, putting it on track for an early 2022 release. In addition to Isaac and Hawke, May Calamawy of Hulu’s hit series Ramy has also been cast.

After a long 17-month hiatus, the Marvel Cinematic Universe finally got back on track this weekend with the premiere of WandaVision. We’re recapping and reviewing WandaVision and all things MCU on the Post-Credit Podcast, so make sure to subscribe and check that out.