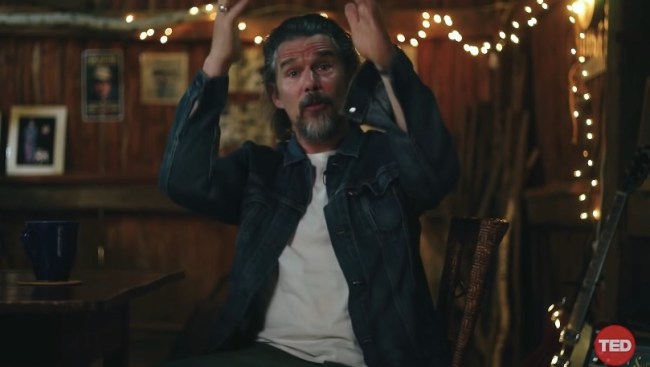 For my money’s worth, Ethan Hawke is the most underrated actor of his generation. There’s not a genre he can’t master nor a role too complex. He’s been nominated for four Academy Awards. He’s starred in action thrillers and indie dramas and horror films. Next year, he’ll make his Marvel Cinematic Universe debut in Moon Knight, marking the first time that Hawke has truly dove into blockbuster filmmaking. Why now and why Moon Knight? Because people are unfamiliar with the source material and that gives him leeway to be as weird as he wants, that’s why. That’s the sort of actor Ethan Hawke is.

As it turns out, the 51-year-old Hawke’s depth as an actor is only rivaled by his depth as a person, as a clip from his TED Talk in 2020 has been going viral for its sheer profoundness.

In the clip, Hawke reasons that while most people don’t spend their days thinking about poetry or other forms of art, they’ll often find themselves in desperate need of it when their emotions are at their most extreme: when we’re coping with grief or trying to make sense of love.

Hawke certainly as a busy couple of years ahead of his, as he’s got four films in post-production — including Robert Eggers’ viking epic The Northman which is going to SLAP — and is set to begin filming Moon Knight alongside Oscar Isaac later this year.

You can check out Ethan Hawke’s full TED Talk “Give yourself permission to be creative”, where he “reflects on moments that shaped his life and examines how courageous expression promotes healing and connection with one another”, below. If you’ve got the 10 minutes to spare, it’s definitely worth the watch.