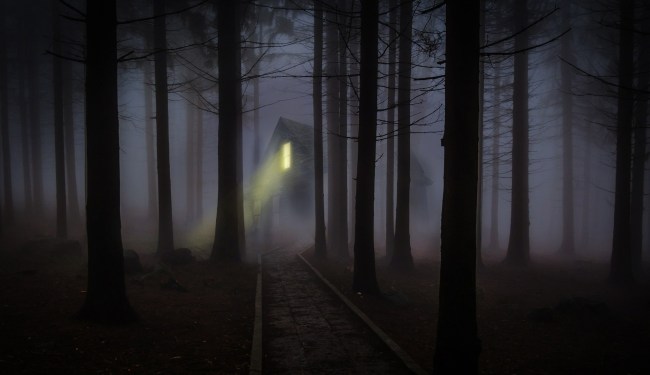 Well, this isn’t at all creepy. A group of teenagers riding four-wheelers in South Carolina last week decided to stop and check out an abandoned house that was purported to haunted. What they found and what happened next, is something that they will certainly never forget.

While investigating the abandoned “haunted house,” one of the teens noticed a deep freezer sitting on the back porch, according to a Orangeburg County Sheriff’s Office report.

Upon opening the freezer, one of the teens, a boy, said he smelled rotten meat and saw what he thought was a body wearing blue jeans and socks. That’s when they decided to call the police.

Related: Florida Man Finds Dead Body In Trash Can He Was Storing At Trailer Park For A Friend

Madison Childers, one of the teenagers who discovered the body, said the experience was terrifying.

“It was very scary,” Childers said. “You couldn’t tell it was a person, because… I think it had been in there for months.”

Childers said the smell was unbearable, and the body was badly decomposed.

“There were maggots everywhere,” Childers said.

Another member of the group, Corey Antley, said, “As soon as the seal broke loose, it was just a horrifying smell. It’s something you won’t forget, really.”

Riley Robinson was also there when the gruesome discovery was made.

“I didn’t know what to do, I was speechless,” said Robinson. “I heard that once you smell a human you can’t ever forget it. And I can still smell it right now.”

The location was immediately declared a crime scene and the body was transported to the county coroner for examination.

Orangeburg County Chief Deputy Coroner Sean D. Fogle said in a statement that they are working hard to identify the remains, determine the the cause of death, and whether the person was a male or female. Yikes.

Ron Phillips, the home’s previous tenant, told News19 his family lived in that house for many years and that he still kept several belongings at the house, even after moving out, including that freezer.

“My daughter grew up out there and it really has affected her to know that somebody would come out there and do such a thing as dispose a body in the old freezer on the back porch,” said Phillips. “It’s just a terrible thing.”

But wait… there’s more. Much, much more.

The owner of the abandoned house was reportedly cooperating with the police, however, less than two days after the body’s discovery, the house mysteriously burned to the ground.

The fire is being called “suspicious in nature” by Orangeburg County Fire District Coordinator Teddy Wolfe.

When asked if the house was indeed “haunted” Phillips, who hadn’t lived in the home for about a decade, said, “Well there was some voices in the house, it’s been like that for years. It wasn’t like it was haunted no, not haunted, but the rocking chair upstairs used to rock by itself in the middle of the night sometimes. It had some spirit about it, that’s the way I put it.”

Perhaps the fire was caused by one of the ghosts.