The Most Haunted Mansion In Ireland Is For Sale, Comes With 22 Bedrooms Full Of Nope 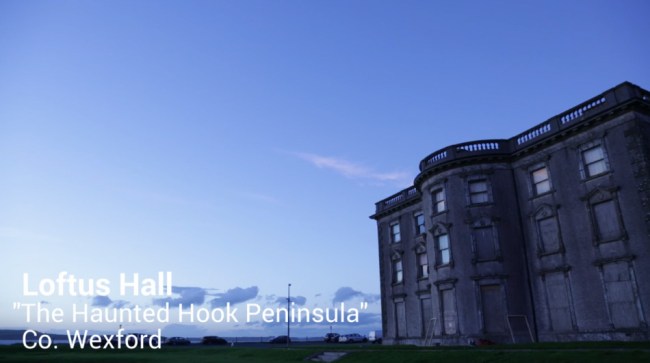 If you are in the market for a new home, Loftus Hall, Ireland’s most haunted mansion, is currently for sale for the low, low, low price of just $2.87 million. It comes with 63 acres of beautiful land, 22 bedrooms, and loads of ghost stories.

It also comes with loads of history as the first castle was built on the site way back in 1170.

Loftus Hall, originally named Redmond Hall, was built to replace the castle in 1350 during the time of the Black Death, so it’s got that going for it, which is nice.

It was then taken over by the Loftus family in the the 1650s with the family using it as their principal residence beginning in 1666.

Legend has it that during a storm at sea, a dark stranger approached the Hall on horseback after his ship was driven into nearby slade Harbour with rough seas. He was invited in to seek shelter and spent some days with the Tottenham Family who were living at the Hall at the time.

The young Lady Anne Tottenham was especially taken with this dark stranger and fell head over heels for him. One night during a card game, she dropped a card and upon bending down to retrieve it, she noticed that this dark stranger had cloven hoofs instead of feet. As soon as he realised what she had seen, he shot through the roof in a ball of flames.

Anne never recovered, she went into a state of shock and madness and her family locked her in the tapestry room for fear that anyone would see her.She died a couple of years later, still quite young, but her death was no release as servants and family members reported seeing her wandering through the house at night. The family had the local catholic priest Fr. Broaders exorcise the Hall but he could not exorcise the tapestry room.

$2.87 million suddenly seems like a lot of money for this place.

The site also notes that since Loftus Hall was reopened for tours in 2012 “people claim to have felt and seen things in the Hall that have left them wondering.”

The Loftuses were a well-connected bunch, and their ties to the English monarchy — however indirect — are responsible for much of the mansion’s current appearance. In the late 19th century, John Wellington Graham Loftus thought a visit from Queen Victoria seemed likely, as his mother, Jane Loftus, had been Lady of the Queen’s Bedchamber since 1851. John spent years renovating the Hall, modeling the expensive revisions off of the royal Osborne House. The Queen, however, never came, and John died in debt.

The estate changed hands several more times throughout the 20th century before landing in the hands of Aidan and Shane Quigley, who bought the property in 2011 and are now interviewing potential buyers. For the Quigleys, it’s not just about meeting the asking price — it’s about demonstrating a comfort with what you’re getting yourself into. “I won’t pick the buyer …” writes Aidan Quigley, “the Hall will.”