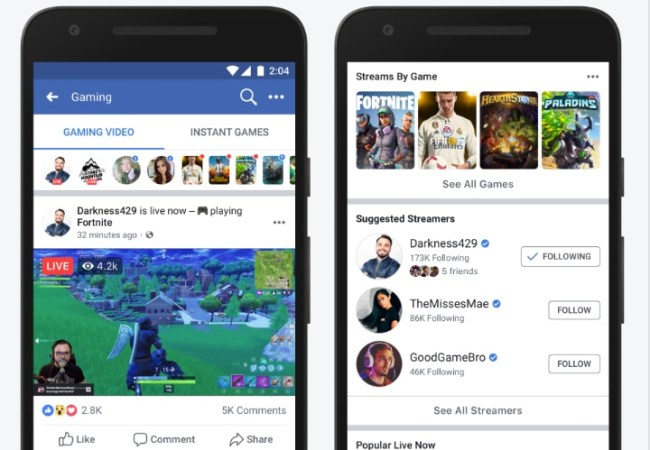 Facebook sees the massive popularity of Fortnite and the success of video game streaming services such as Twitch and YouTube. Now the social network wants to get in on that sweet streaming action. On Thursday, Facebook launched their own dedicated game streaming hub called “Fb.gg,” in hopes of snatching another source of revenue and users.

In the past few years Facebook has made subtle moves to get into the gaming streaming service and now they have their own dedicated hub. Facebook users can access the portal at the URL FB.gg, where they will be able to view live and prerecorded streams of games as well as esport competitions.

“People will be able to discover gaming video on our new destination based on creators and games they follow, Pages they like and Groups they belong to,” the Facebook blog states. “We’ll also feature creators, esports competitions and content from gaming industry events on fb.gg. To seed the ecosystem, inspire others, and bring great content to fb.gg, we are funding content from creators and esports that will also be aggregated in our gaming video destination.”

Facebook has had a history of “borrowing” ideas from other social media platforms to enhance their product, so Twitch should be worried. Facebook is attempting to steal Twitch gamers by introducing the Level Up Program that will pay gamers with a Patreon-like system. Gaming is quite lucrative right now with streaming stars such as Tyler “Ninja” Blevins making $500,000 a month to play video games such as Fortnite and PUBG. Facebook plans to reveal more about the new Fb.gg service at E3 2018 in Los Angeles next week. Twitch, you’ve been put on notice.