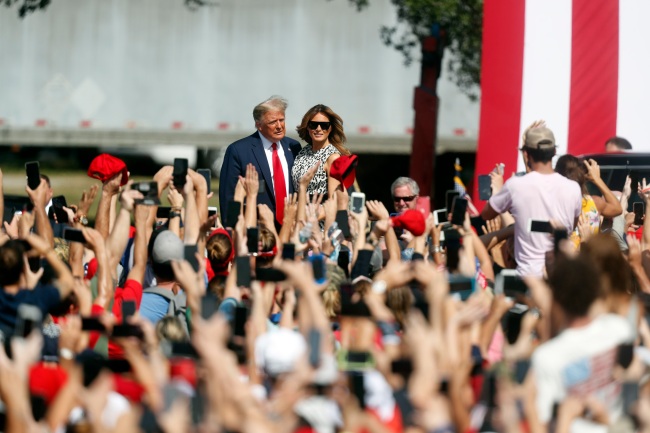 We’re only a few days out from the Presidential election and the fake Melania Trump conspiracy theory is making the rounds again.

Over the weekend, a photo of Melania sitting inside a helicopter with Donald Trump went viral because people were convinced it was a stunt double traveling with the President instead of Melania herself

On Friday, a video of Melania kissing the President at a rally led to questions from the Internet because not only did Melania look unrecognizable on stage, but she’s never really been affectionate with the President in the past.

The real Melania won’t even hold his hand. pic.twitter.com/sOSBz6SGBy

Seriously…why is there a fake Melania?

Theyre definitely using a body double right? Like its not a conspiracy, its just the truth, yea? https://t.co/A0LHV3yllH

full truther on the melania double theory now. i don’t care anymore. this is all i have https://t.co/5sWtPxG9oi

That is NOT Melania.

I was a little skeptical of the "fake Melania" stuff, but that lady doesn't even look like her. She's the wrong height, too.

oh come on man her face looks nothing like her lmao https://t.co/QQmAD6FTXs