Melania Repeatedly Refusing To Hold President’s Hand Gets Turned Into A Meme By Rihanna, Others 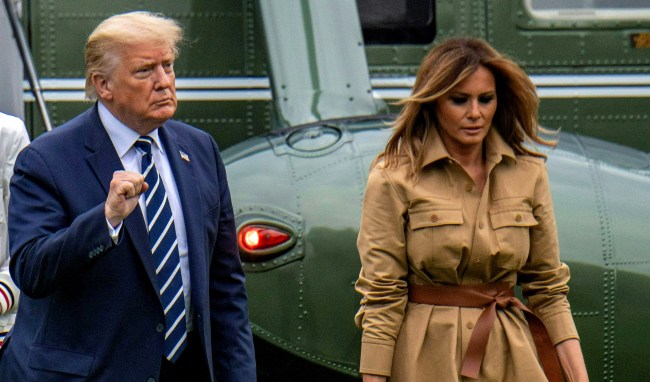 One of the long-running jokes during Donald Trump’s presidency has been centered about his wife Melania Trump and the fact that so many people believe she wishes she could be anywhere in the world but with him (which has in turn spawned numerous Fake Melania conspiracy theories and caused the hashtag #FreeMelania to go viral).

This longstanding joke has been fed greatly by the fact that on multiple occasions over the past four years Melania has swatted her husband’s hand away when he’s reached out to try and grab it.

"Still not touching you" – Melania pic.twitter.com/bx9kZmdPwW

This week, the joke resurfaced thanks to, once again, Melania refusing, repeatedly, to let Donald hold her hand as the couple disembarked Air Force One.

This time, however, it wasn’t just the usual internet hooligans posting memes and jokes on social media, none other than Rihanna decided to get in on the fun by adding music to the video in the form of her 2016 song “Needed Me.”

In the comments, fellow singer Lady Gaga wrote, “That Birkin is PISSED.”

Zoe Kravitz also commented that she loved the video, while 50 Cent reposted the original video himself with the caption, “😆she don’t want to hold his hand. LOL.”

Naturally, many people suggested she was just trying to hold her dress down in the wind, but Donny’s repeated attempts to grab her hand and failing, combined with the numerous other times she has refused to hold his hand were just too much for people to not make jokes.

*The ground is Donald Trump’s hand*

I will say ONE thing about Melania. That bitch has fucking Jedi reflexes whenever Trump’s hand goes near hers.

Even Hilary Clinton ended up getting sideswiped in the comments.

Lets remind ourselves of how Hillary tackles stairs. 🤣😂🤪🤣🤣 pic.twitter.com/lXIGevbGt9