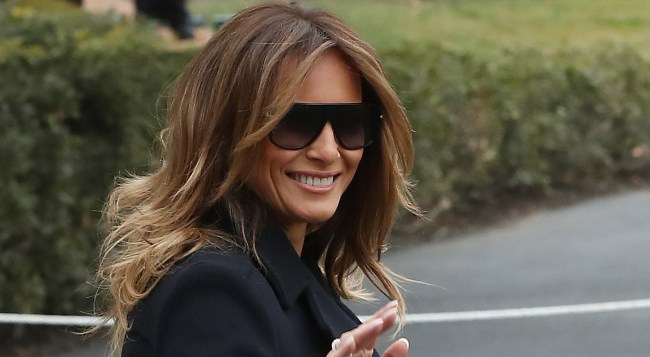 It’s back! The “Fake Melania” Trump conspiracy theory has reared its head again and this time people are CONVINCED she uses a body double.

I have to admit. I do love it when crackpots people come up with wild conspiracy theories. Especially when they are about other humans.

There was a good one awhile back that claims Avril Lavigne is dead and has been replaced by a clone. (Something she didn’t deny!)

Then there’s the one where Disney supposedly killed, cloned and buried the real Miley Cyrus in the desert. Totally believable.

A Taylor Swift conspiracy theory claims the singer is an Illuminati clone of a Satanic church leader. Also believable.

Of course, sports fans are also always down for a good conspiracy theory.

Another one of my faves is the one that claims Donald Trump was killed by the Illuminati and we elected a clone as President. Seems likely.

That one dovetails nicely with the whole “Fake Melania” conspiracy, as well as with #HillarysBodyDouble.

Speaking of which, over the weekend the Trumps visited Alabama to view the damage and attend a memorial after a tornado ripped through the area.

While at the memorial, a photo of The Donald and Melania had people, many people, scratching their heads because the woman holding hands with the President sure doesn’t look like The First Lady. Like, not at all.

GUYS THAT IS NOT MELANIA pic.twitter.com/2kfo7QMU2x

I know everyone likes to laugh about how stupid the #FakeMelania conspiracy is.
So let’s just look at these two pictures from yesterday. How does a human being shrink a good five inches in a matter of hours? pic.twitter.com/G2wx9MiCfj

Ok People! Let’s list all the ways #FakeMelania is different than #RealMelania. What the hell—it’s the weekend, we all deserve some downtime.

It’s bizarre that they trot out #FakeMelania, thinking no one will notice. This one’s shorter + looks nothing like her!

Where’s the REAL one? pic.twitter.com/3DqtT02O65

Did anyone from the press or public actually hear Melania speak during that trip to Alabama? I must say, Melania's secret service agent looks a lot like her, particularly with sun glasses on. But even if she had the same heal height, she'd be a bit shorter. #FakeMelania pic.twitter.com/lewaUPwy0T

OK BUT SERIOUSLY. LOOK AT HOW DISTINCT THIS WOMANS CHIN IS. MELANIA’S CHIN IS MUCH WIDER. THIS WOMAN LOOKS LIKE MY ELEMTARY SCHOOL PRINCIPAL NOT MELANIA #FakeMelania pic.twitter.com/lMBZwsiJRE

Everyone’s talking about #FakeMelania but I’m more interested in the context of this photo pic.twitter.com/ZbJCzS42kx