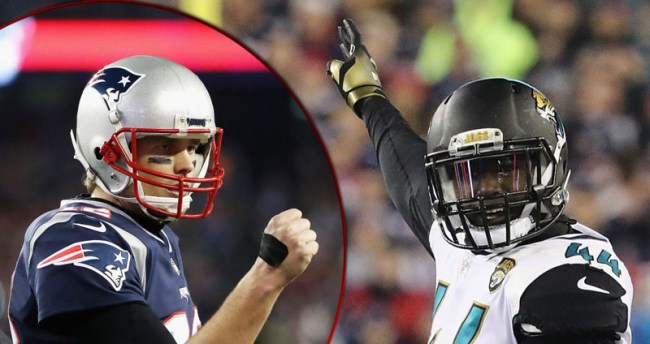 With the New England Patriots mounting a tremendous comeback to beat the Jacksonville Jaguars 24 to 20 to win the AFC Championship for the 10th time, the conspiracy theories have been flowing fast and furious. Apparently going to the Super Bowl for the third in four years will do that. That, and you know, being the Patriots.

Anyway, just like Saints fans after their losses to the Vikings and Falcons, people all over the internet are espousing numerous conspiracy theories that the NFL is rigged to help the Patriots make their 10th Super Bowl appearance since 1985.

Jaguars linebacker Myles Jack is one among the many that believe he got hosed on a forced fumble not being called that should have resulted in a Jags touchdown, among other things, during the AFC title game.

After the game, Jack “liked” a tweet by Oakland Raiders linebacker Bruce Irvin posted where he was joking (I think) about the referees working for New England.

First guy to congratulate Brady? Number 34. What a teammate! pic.twitter.com/azXq3qgN43

After the game, when told of the penalty discrepancy between Jacksonville and New England Jack just said, “Interesting. My thoughts on that is … yeah, that’s kind of self-explanatory. I didn’t know that.”

The Patriots were called for 1 penalty against the Jaguars

Jack and Irvin were just the tip of the NFL conspiracy iceberg though, because, like I said… Patriots.

Patriots down by 2 scores at halftime? Refs will fix you up don’t worry

This coverage was so dominant that they basically threw a pity flag for Cooks. Crushed off the field pic.twitter.com/SC3PbW3hco

LMAO! @NFL doesn't even TRY to hide that shit! pic.twitter.com/fUHnYURpOu

Did the refs really just call like 50 yards of penalties on the #Jaguars to give the #Patriots a touchdown to close out the first half? And you wonder why people are suspicious…

Ok, let's do the math on penalties:

NE once in last 5 games held less than a 2-1 penalty yd advantage. Nearly 3-1 in yds

Penalty on the Jaguars for being too many points in front of the Patriots before halftime pic.twitter.com/sojhWYl7wq

Zero penalties on the Patriots offense and defense today, by the way.

Referees coming in clutch for the Patriots now

Congrats to the @Patriots and the referees on their #AFCChampionship win over the @Jaguars It was a closer on than expected. #GoRefs

At what point does the @NFL have to fave the fact that referees are afraid to call penalties on the Patriots? THIS is why people are turning the game off in record numbers. It’s a joke.

The Patriots and Tom Brady are amazing, but when you get 88 more yards than your opponent in penalties, and the refs take away a touchdown from your opponents by incorrectly calling a player down after they recovered a fumble, it is REALLY tough to lose. #JAXvsNE #AFCChampionship

NFL Referees watching the game and seeing their colleagues making calls for the Patriots pic.twitter.com/3sZMI5K2M4

Dear @Patriots and their fans, I have a fun game for us to play. How many penalties can you spot in this single pic? pic.twitter.com/FLSX4kWj7Q

I'm drafting the Patriots referees in the first round of my fantasy draft next year. Unstoppable

Happy to finally get recognized