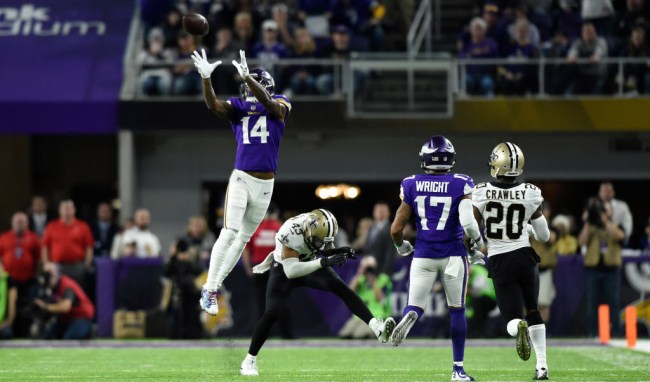 Remember when the New Orleans Saints choked away a win in a wild game versus the Atlanta Falcons on Thursday night back in December? You know, after their coach Sean Payton gave the Falcons the “choke” sign?

The day after that improbable loss Saints fans were all over the internet with conspiracy theories claiming that the game was rigged. They even offered some compelling evidence.

Well, just like back then, now Saints fans are saying their completely devastating playoff loss to the Vikings was also a conspiracy. And once again, they are offering up some “compelling” video evidence that the “Minneapolis Miracle” was not really a miracle at all.

Naturally, the key player in this conspiracy theory is defensive back Marcus Williams, who inexplicably whiffed when making an attempt to tackle Stefon Diggs on that final play. However, he isn’t alone in the fix, at least according to this Saints fan. He also says defensive end Cameron Jordan was in on it, passing up a chance to possibly sack Case Keenum, or at least disrupt his rhythm and timing on his throw.

Check out this video he made, complete with slow-motion, arrows, circles, and creepy voice-altered commentary.

That’s quite a presentation there, I’ll give him that, but personally, I still think it was all Sean Payton’s fault. Karma has been undefeated for centuries so he should have known better.