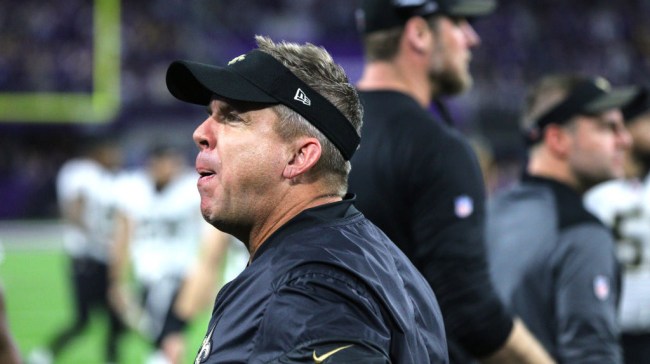 See that photo of New Orleans Saints head coach Sean Payton there? According to Getty, that is Payton’s reaction “on the sidelines after the Minnesota Vikings scored a last second touchdown to win the NFC Divisional Playoff game on January 14, 2018.”

It’s a photo that should be framed in every Viking fan’s man cave because it is a picture that epitomizes the kind of karma that leads to epic events like Stefon Diggs’ miracle touchdown catch to defeat the Saints.

I say that, because according to the Star Tribune…

Saints coach Sean Payton turned around and taunted Vikings fans with a Skol clap at U.S. Bank Stadium after New Orleans took a 24-23 lead with 25 seconds left. It was first pointed out by former Vikings linebacker Ben Leber, who now works as an analyst for KFAN and Fox Sports, and corroborated by photo evidence on Twitter.

According to @nacholeber on KFAN, apparently Sean Payton was mocking fans behind the Saints' bench with the Skol chant prior to the final play.

You know, just in case you thought you couldn't squeeze any more enjoyment out of what happened last night.

Saints HC Sean Payton was 100% sure they had won when he mocked #Vikings faithful with the Skol Chant. Cc: @jgkfan @PAOnTheMic pic.twitter.com/qC2zNNs1u6

Naturally, someone also turned it into a GIF, because, internet.

You would think Payton would have learned from the Saints’ December game against the Falcons not to taunt his opponents or their fans before the clock strikes triple zero, but nope…

The NFL will look into #Saints coach Sean Payton's conduct towards game officials last night, per league source. Could be fined if NFL decides he crossed the line.

No, need Tom. Karma has got a solid hold on Payton and she isn’t letting go.

As for why Payton did it? It was all just in good fun, people!!

Sean Payton on pictures showing him doing the "Skol" chant: "Just a group of fans … it was good playoff fun."