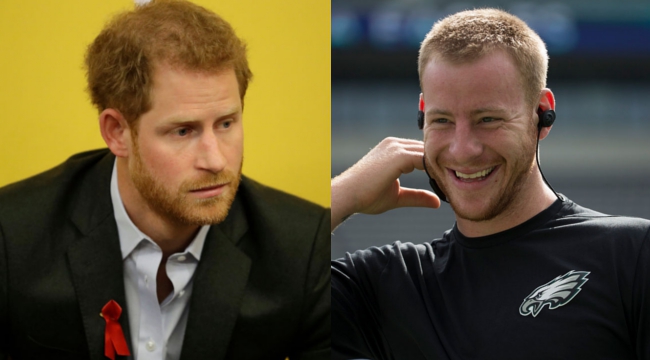 Earlier this morning, Americans woke up to the news that Prince Harry had gotten engaged to Meghan Markle, prompting one group of people to freak out over the concept of a royal wedding and making another group (which I admit I belong to) to say “You mean the actress from Suits?” I’ve since learned they’ve been dating for a while because I apparently don’t wander to the parts of the internet where things like that are discussed.

Soon after the announcement was made, a number of people noticed the similarities between Prince Harry and Philadelphia Eagles quarterback Carson Wentz, who has made quite a name for himself this season by leading his team to the top of the NFC with a 10-1 record. It was only a matter of time before a conspiracy theory started to circulate: are Harry and Wentz actually the same person?

Plenty of people on Twitter were quick to point out the similarities:

Prince Harry and Carson Wentz have to share at least one parent. pic.twitter.com/dAtVG4bceN

I’ve never seen Prince Harry and @cj_wentz at the same place at the same time pic.twitter.com/6S1ejPBYwy

It was only a matter of time before the Eagles themselves added fuel to the ever-growing conspiracy fire by posting this tweet:

"It’s one of those things where every week we just come in ready to work."

However, these pictures aren’t the only evidence that Wentz and the prince are the same person. SB Nation pointed out this one very, very important fact:

“Carson James Wentz” is an anagram for “Amass Crown Zen Jet.” Prince Harry’s plan all along was to amass a football following for the crown, then jet. It means he’s going to leave the Eagles as soon as the season is over and start his royal life in earnest.”

I don’t want to say the evidence is overwhelming, but I have a hard time overlooking facts like these.