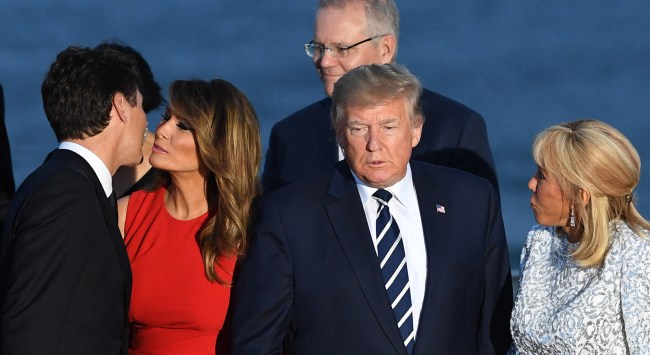 The internet loves nothing more than discovering a photo that it can add its own caption to and turn into a popular meme. The internet also loves it when America’s First Lady Melania Trump looks like she’s about to jump ship and head for safety somewhere far, far away from The Donald. (Right behind fake Melania conspiracy theories.)

That is how the #FreeMelania movement was born, after all.

So, when a photo of Melania Trump looking like she was ready to risk it all with hunky Canadian Prime Minister Justin Trudeau at the G7 summit surfaced Sunday night, a mountain of new memes and a brand new hashtag, #MelaniaLovesTrudeau, were born.

Melania is ready to risk it all #Trudeau pic.twitter.com/lEz5sjuQBD

Looks like even Melania is thinking of an escape plan to Canada #MelaniaLovesTrudeau pic.twitter.com/LW6RyO2ULh

InStyle even went so far as to enlist the opinion and analysis of body language expert Patti Wood.

“Let’s talk about something that other people might not notice, which is part of what makes it such a dramatic photo, and that’s the hand hold,” said Wood.

Donny does kind of look like he’s cutting off the circulation to Melania’s fingers in the photo.

“If you look at it, you’ll see it’s just the last bottom of his fingers he’s using to hold and pull her up,” Wood continued. “And if you look at the end of her fingers, that last digit of hers, you can see that there’s tension in that last digit. It’s not curled around him. You’re seeing in that hand hold him pulling and manipulating and her having tension in the hand.”

As for the look Melania is giving Trudeau, Wood said, “Her offering up, the way her neck is arched up, the way her mouth is placed up, the lips are partially pursed for the kiss, plus the look — there’s a reason that some people have made this into a romantic novel cover, because if that was just from the shoulders up, it would look like a romantic. The body language is that of a romantic kiss. There’s nothing offhand or spontaneous [given that they were at a photo op]. This is something she’s doing purposefully.”

The #MelaniaLovesTrudeau image was missing a little something … now with music. #bebest @realDonaldTrump pic.twitter.com/4aElXm38JJ

Not sure I buy all of that, but it’s certainly fun to speculate and make jokes, right, Twitter?! Hells yes it is.

'Everyone should find someone who looks at them the way Melania looks at Justin #Trudeau'?https://t.co/cTVsbQcl4i

Melania trying to have a Hot Girl Summer too #MelaniaLovesTrudeau pic.twitter.com/w1k6FKaDat

With aromas of humility and humanity and a scent of decency

Subtle yet all consuming#MelaniaLovesTrudeau by Calvin Klein – available everywhere pic.twitter.com/2HUtjuILyn

And in that moment it was like she was alone with him. Her mind raced and every fiber of her being told her to kiss him deeply.#MelaniaLovesTrudeau pic.twitter.com/tn51aUGn8f

Bout to be a call for a wall along the northern border, just wait… #MelaniaLovesTrudeau pic.twitter.com/Y0DOHJCuC6

Really, the only problem I see here is that Melania is going to have to fight her step-daughter Ivanka Trump if she does plan on making a move on Trudeau.

There’s gonna be a cat fight in the WH when Melania get back in the States#MelaniaLovesTrudeau#IvankaLovesTrudeau pic.twitter.com/zPcJkdguRK