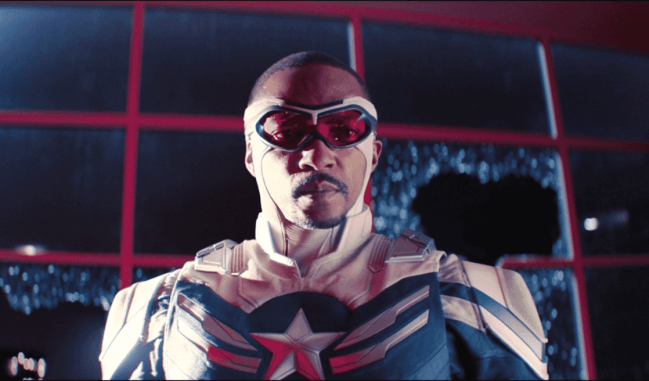 The Falcon and the Winter Soldier was already one of the Marvel Cinematic Universe’s most politically charged projects, and according to series star Anthony Mackie, efforts were made to have the finale be even more politically relevant by including a “Make America Great Again” reference.

During Marvel Studios and Disney’s Drive-In FYC event at the Rose Bowl over the weekend, Mackie — who has played Sam Wilson in the MCU since 2014’s Captain America and the Winter Soldier — revealed that a line referencing former President Donald Trump’s infamous slogan was cut from the finale, saying that it got “shot down”:

“With all of the protests and everything that went on in 2020, there were just as many Brown people as Black people as white people as Asian people. Everyone, everyone in this country at this time wants to see a change, and that monologue sums that up a beautiful way,” said Mackie.

“One thing I wanted to put at the end of the monologue — and it got shot down — was if we’re going to ‘make America great again,’ it has to be done by Americans. And no matter what your race, creed, color or sexuality is, you’re an American. And that’s what I think the new Captain America captures.” [via Variety]

All six episodes of The Falcon and the Winter Soldier are now available to stream exclusively on Disney+. We’re covering all things Marvel Cinematic Universe — from Falcon and Winter Soldier to Loki to Black Widow, over on the Post-Credit Podcast, so make sure to check that out. We’ll be covering every new episode of Loki as soon as it drops on Wednesdays.

RELATED: Marvel Fans Think They Spotted A Direct Reference To Steve Rogers In The ‘Loki’ Premiere