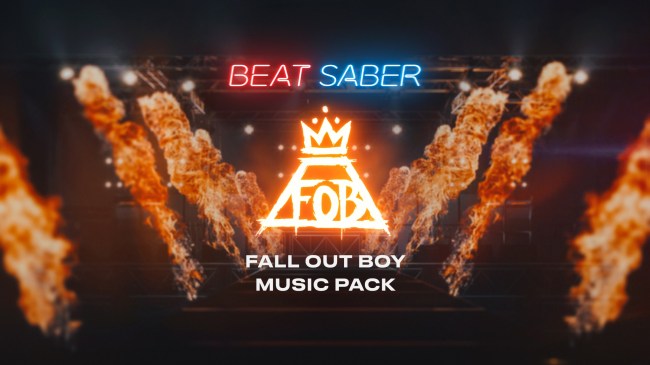 Beat Saber is a 2018 virtual reality rhythm game developed and published by the Czech developer Beat Games. It has been described as “a mashup of Fruit Ninja and Rock Band” in which the player slashes blocks with swords to the beat of a song.

The gameplay of Beat Saber primarily consists of the player slashing color-coded blocks with motion controllers to the beat of the music. The player must slash the blocks in the direction indicated by arrows on the block.

If you haven’t tried it out, Beat Saber is a next-level VR experience on the Meta Quest 2 – It’s an immersive light show that’s both a great way to get your heart pumping and relieve stress. The perfect VR mental health escapism.

Beat Saber has exploded in popularity over the last couple of years. Mega artists like Lady Gaga and Billie Eilish have dropped exclusive music packs for the game, paving a path for more artist collaborations on the platform.

Pete Wentz hyped it up in a press release: “Our shows are flat out filled with pyro – it’s rock n roll. That’s why our first VR collab had to have a TON of it… this will be the biggest rock show that Beat Saber has ever seen. Turn it up!”