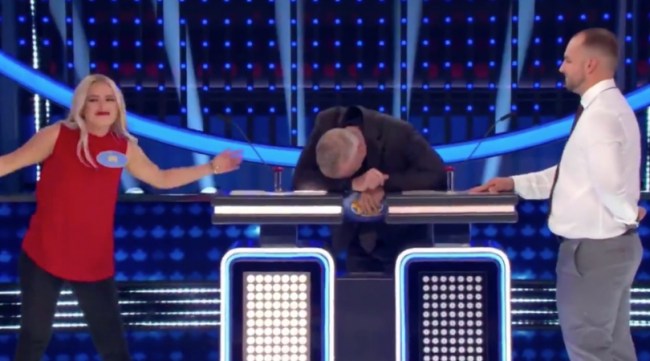 To quote Popeye the Sailor Man: “Well blow me down!”

It’s been a tough day for Eve, a contestant on the Canadian edition of Family Feud, who became the target of social media mockery and, in all likelihood, the intense rage of her family with the utterance of one word.

So Family Feud Canada exists, and tonight it gave us one of the most amazing moments in the history of television (h/t @cjzero) pic.twitter.com/uuJkTXH8q0

Her family was stunned. The audience was stunned. Her opponent rubbed his hands together and licked his lips, prepared to deliver the correct answer—spinach—in what was likely the most triumphant moment of his life.

While the lovely Eve will go down in the annals of game show history for delivering one of the most bone-headed answers every, I’d be remiss if I didn’t throw on my whitest suit of knight’s armor to offer a defense.

First off, the question wasn’t specific enough. What Popeye are they talking about? Popeye The Sailor Man? The Popeye who had a Louisiana Kitchen that turned into a sensation? Popeye, the Man With The Popped Eye who gained fame touring with P. T. Barnum? It could have been any of them.

Here in the Year of Our Lord 2020, the preeminent “Popeye’s” is not the Sailor Man; it’s the Louisiana Kitchen. The fast food chain has been on a heater since the rollout of its chicken sandwich last year, which quickly became a sensation. As a result, when someone says “Popeye’s” the minds of most people probably gravitate in that direction.

If she was thinking of Popeye’s the restaurant—as she clearly was—Eve was actually correct because chicken is the favorite food of Popeye’s Louisiana Kitchen.

As anyone who has ever seen an episode of Family Feud can tell you, a sudden death question is a pressure cooker situation. Poor Eve was tucked away at the end of her family’s lineup, thinking she wouldn’t have to take center stage and flex those lightning-fast buzzer reflexes. But sure enough, the rest of her family laid an egg and couldn’t put away their opponents, so here comes Eve to save the day.

Even if Eve was thinking of the proper Popeye, why is she expected to know the dietary habits of a cartoon sailor from the 30s? I know it’s one of those pop culture facts that everyone is expected to know but I don’t think that not knowing that Popeye gained super-human strength from shotgunning canned spinach makes you in idiot in this day and age.

I’m sorry. I didn’t realize that we were all supposed to be experts on the ins and outs of Popeye The Sailor Man.

While the answer itself wasn’t a particularly stellar display of Family Feud-ery, there were still some highlights from Eve’s performance.

Eve’s buzzer technique is the stuff of legend. She heard the whole question first (very polite and Canadian) and then slammed the buzzer down like it owed her money.

With that said, after her buzzer display, Eve made the one mistake I have to call her out on: her answer delivery.

The way she said “chicken”—combined with her celebratory dance—is the Feud version of high-stepping into the end zone only to have the ball knocked out of your hands on the one-yard line. There’s no need to showboat and give the other family bulletin board material.

Poor Eve thought she had sealed the deal and guided her family into the Fast Money round, but instead, she was left with the silence of the TV studio, broken only by the sound of the jaws of her stunned family members clanging to the ground.

But, no matter how many ways there are to defend Eve’s doing (which I think should henceforth be known as “Eve’s Folly”), it undoubtedly will be a long, tense journey back to Lorette, Manitoba for Eve and the rest of the Dubois clan.