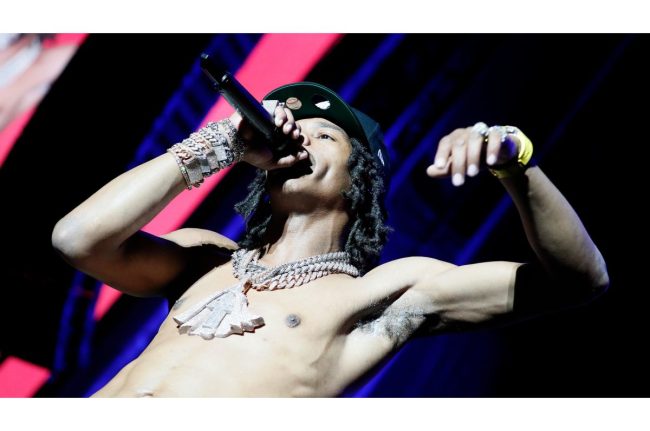 Lil Baby performed at the Openair Frauenfeld festival last week in Switzerland, and fans in attendance got a little extra action during the rapper’s show.

A video clip is now circulating social media showing an overzealous fan rushing on stage to try and touch the performer mid-show. It’s safe to say that it didn’t end well for the attendee.

After storming onto the stage, Lil Baby’s security team swiftly tossed the fan off into the front row. His head came crashing into a barricade after going airborne from the shove. Check out the powerful push below.

Followers on social media were quick to react.

This was a monstrous push. This guy got some serious air, and it had folks on social media comparing the security team to an offensive line or a WWE tag team.

And it certainly didn’t look too pleasant for the guy on the receiving end, as he’s seen soaring into those metal barricades head-first.

Lil Baby got a better O-Line protecting him than Sam Darnold pic.twitter.com/x6sh6EA1ws

How me and @twashington757 would do em when they came through our gap! https://t.co/17uYErsLnK pic.twitter.com/2Nbf4zjLVM

This some WWF No Mercy shit https://t.co/l3tlAKnbsJ

His feet were running in mid-air like Wile E. Coyote. https://t.co/1hikaNZEa8

Lesson #1: Don’t be the fan that gets on stage, especially at a Lil Baby concert. This guy learned this lesson the hard way.