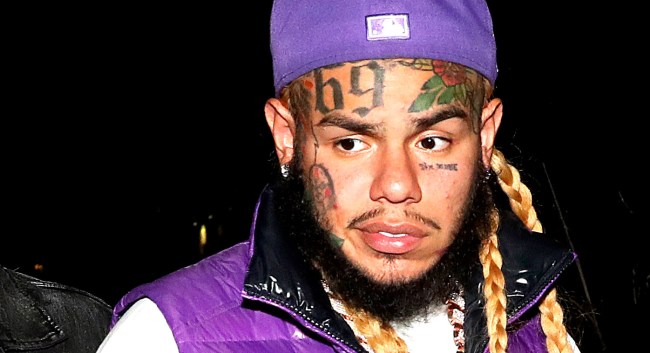 In October of this year, controversial rapper Tekashi 6ix9ine shared an Instagram post that has since been removed that touted his new Trollz NFT collection.

The fact that the NFT project was being promoted by Tekashi 6ix9ine was met with much skepticism, including an article published by Rolling Stone with the headline “Known Racketeer Tekashi 69 Is Peddling New NFTs for ‘Charity'”.

Fast forward less than two months and Rolling Stone is back with another report on Tekashi 6ix9ine’s Trollz NFT collection and it would appear that their, and others, skepticism was well warranted.

Related: Keanu Reeves Talks About The Metaverse And Cryptocurrency, Laughs At The Concept Of NFTs

In the article, a crypto enthusiast and investor named Jacob, who’s been studying blockchain tech since 2017, tells Rolling Stone that he spent around $40,000 on Tekashi 6ix9ine’s NFTs.

“It turned out to be a huge scam,” Jacob revealed.

…the organizers insisted — on both the website and the Trollz Discord server — that giving back to charity was an integral part of the project’s model. Not only did they promise to donate a total of $100,000 to five different charities upon selling out, royalty-holders were supposed to be given governance power, allowing them to “vote on all decision making and what to do with the funds,” according to the Discord, which also highlights “weekly competitions and raffles” — separate from the boxing game — as a “key benefit” to being a part of the community. According to the website, “anything promised on Trollz web/Discord will be delivered.”

Jacob minted 82 Trollz NFTs — and later bought more from the secondary market. He has yet to receive royalties or access to any sort of game. (On Oct. 29, one organizer announced that the game would be finalized in “the next few days.” On Nov. 1 — the last time the game was mentioned on the Trollz Discord server — they backtracked to say it was still “being revised.”) He has not seen a single raffle nor evidence of philanthropy. He also says that a Discord channel for verified Trollz holders has not opened up as promised.

One moderator named Trollz blamed some of the issues on hackers.

“A few minutes prior to our launch, we were attacked and scammers hijacked our server and sent a fake website ending in .com to all channels,” he wrote.

But based on screenshots of since-deleted Discord messages by a moderator called Vamp, the blitz came from the inner sanctum itself when another one of the project’s moderators went rogue: They “basically took over a bot and tried to ruin the project,” wrote the moderator. According to Jacob, and five other Trollz owners who spoke with Rolling Stone, bots started spamming all the main channels with fake minting links, and many people sent money without getting anything in return. (On YouTube, there’s what appears to be a leaked recording of the moderators’ private Discord channel during the hack: There, organizers can be seen panicking, typing messages to one another like “werr fuckdd,” “WHERE ARE THE LEAD TROLLS,” “DID ALL THE LEAD TROLLZ LEAVE? WTF IS GOING ON,” “IT WAS ONE OF THE STAFF MEMBERS, SMFH.”)

Jacob, along with 11 other members, started their own Decentralized Autonomous Organization (DAO) in attempt to mitigate all of the problems they and other investors have encountered. They hope that their story will eventually lead to more, much needed regulation.

“Scammers are making promises they’re not delivering on, and they’re doing it like clockwork,” says DAO member TrollerRoller. “Every month, some celebrity cosigns something, and people are getting screwed — and there are no legal repercussions for any of this. That’s the bigger issue at play.”

Meanwhile, Tekashi 6ix9ine has not commented any of the claims about the NFT project being a scam and appears to have tried to distance himself from the project entirely.

Read the full, very in-depth report over at RollingStone.com.