Keanu Reeves Talks About The Metaverse And Cryptocurrency, Laughs At The Concept Of NFTs 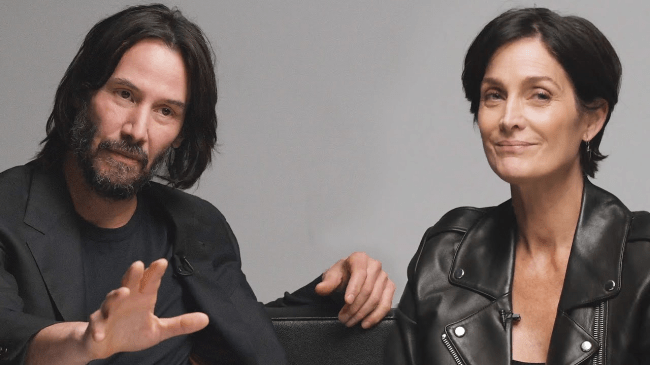 As two of the stars of The Matrix film series, Keanu Reeves and Carrie Anne Moss have a couple of very unique perspectives on the concept of virtual worlds – including cryptocurrency and NFTs.

The Matrix Resurrections actors have spent more time thinking about what it would be like to live in a virtual world than the average person and so they were asked for their thoughts about the metaverse in a lengthy interview with The Verge.

Reeves and Moss had differing perspectives on how technology is blurring the line between the real world and the virtual world, which involves concepts like cryptocurrency and NFTs.

One story Reeves told encapsulated some of the differences in how that line is viewed depending on the viewpoint of the person discussing it.

“I was having dinner with friends house, this director, and he had some kids and there was like a 13 year old, a 15 year old, a 17 year old. And they hadn’t seen the film The Matrix and so the director’s like, ‘Well, why don’t you just tell them what it’s about?'” Reeves shared.

“So I’m starting to say, ‘Well, there’s this guy who is in a kind of virtual world, and he finds out that there’s a real world, and he’s really questioning what’s real and not real, and he really wants to know what’s real.

Moss, on the other hand, isn’t so sure that it’s awesome.

“I’m the mom at the kitchen table, talking about the possibility of like, a virtual world for my kids and I’m crying,” she said. “That’s how it feels for me.

“But now I just, I don’t know, just kinda like sitting around the table and talking.”

Reeves then jumped in and enthusiastically explained, “No, no, but you’ll be able to sit around at your table and talking and …”

Moss quickly interjects, “What if it’s not a real table? What if I don’t know if it’s real or not?”

“That’s the other question too, which is one of the issues that we’re being, yeah, confronted by very quickly,” Reeves replied.

Continuing on the subject of virtual worlds, Reeves was quick to jump in and beg the world, “Can we just not have metaverse be invented by Facebook? The concept of metaverse is like way older than that. It’s like a way older, and so for that moment to get to… I’m just like, ‘Come on, man.'”

The subject then turned to cryptocurrency.

“A friend of mine bought some from me awhile back,” said Reeves, who then admitted he hadn’t done anything with it because “I haven’t had to.”

Moss and Reeves were then asked if they had seen The Matrix NFT thing that they did for Resurrections last week.

“They made NFTs for the new movie, and there were like a 100,000 of them, and the site broke in the first few hours, because there were over 300,000 people in the queue trying to buy these NFTs for $50,” the interviewer explained.

You ask, you get. It is time for @AMCTheatres third ever NFT !!!!! We have secured 20 Matrix NFTs, from Nifty‘s and @warnerbros. Will be given away on AMC social channels starting Monday 1PM EST. The Matrix Resurrections opens December 22. For tickets: https://t.co/9RClikAuj8 pic.twitter.com/kBd2Zla7ay

“And so when you think about the concept of digital scarcity and things that are they can’t be copied…” he continued before being interrupted by Reeves.

“That are easily reproduced?” Reeves shot back with a big belly laugh.

Related: People Are Paying Almost $300K For NFT Rocks, Which You Can Download For Free Right Now

“I wonder what, do we get a cut of that?” Reeves then asks Moss.

The internet, once again, loved Keane Reeves honesty and practicality.

Keanu Reeves laughing at the concept of NFT’s makes me like him that much more. pic.twitter.com/qHWd2EKSTn

Keanu's laugh in response to NFTs in this @verge interview is everything I wanted for Christmashttps://t.co/v4pix60nX9 pic.twitter.com/1J5EcoijDs

The reaction of every sane person...

He’s so based I lost vision reading that. I’m now legally blind using text to speech as I post this.

Watch the entire interview below where Reeves and Moss also talk about The Matrix Resurrections and the upcoming The Matrix Awakens video game.