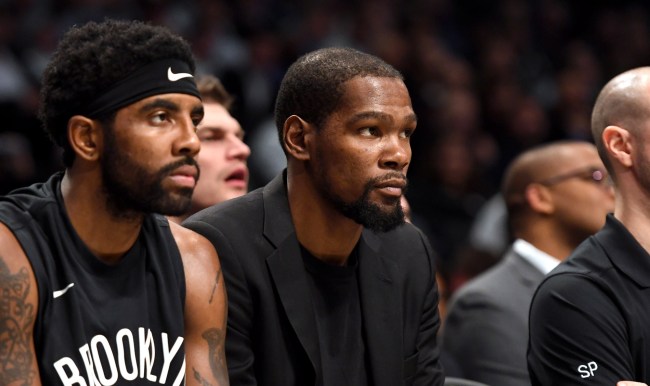 Fire up the burner account. Kevin Durant has been slighted on social media.

This time, however, like the time he was left off a video that called the Golden State Warriors the Franchise of the Decade, the slight is 100 percent legit.

On Wednesday, with the NBA All-Star Game coming up, NBA on TNT tweeted out a graphic asking fans to pick their all time NBA All-Star roster.

The graphic showed 25 players with five each worth 5 points, 4 points, 3 points, and so on and set a limit of 15 points for the whole roster.

For example, Kobe, LeBron, MJ, Magic, and Kareem are all worth five points, so you you are limited to picking just two of them in order to be able to complete your starting five.

Inexplicably, Kevin Durant was listed on the lowest tier, worth 1 point along with Russell Westrbook, Jerry West, John Stockton and George Gervin.

You have 15 points to build your all-time #NBAAllStar squad. Who are you picking? 🤔 pic.twitter.com/66Ji5WENFv

As a result, NBA fans had a lot to say about Durant’s low ranking, and many opinions about who else was ranked wrong in their eyes.

Thats damn disrespectful Durant should be $6

This is just straight up disrespectful, KD only 1 point? He’s arguably best scorer of all time behind MJ, the dude is 7 foot with limitless range who can handle like a pg, drive, pass and defend.

Durant and Melo needs to swap places. Westbrook should not be on this list. Where the hell's Steph and TMac?

Im sorry how is VC more expensive then KD

lol they left steph off and made KD worth 1. which fool made this?

In what universe is Wade more valuable than Bill Russell?
Fucking Millennials

This has to be one of the most ridiculous things I have seen on this app. Who at @NBAonTNT put this together?

I won't even use this to build a lineup, its insulting. https://t.co/TUIHCs2PoZ

@CrypticNoOne KD Burner account about to go in overtime

Now we just have to figure out which one of the responses is really KD. Get to work, internet.