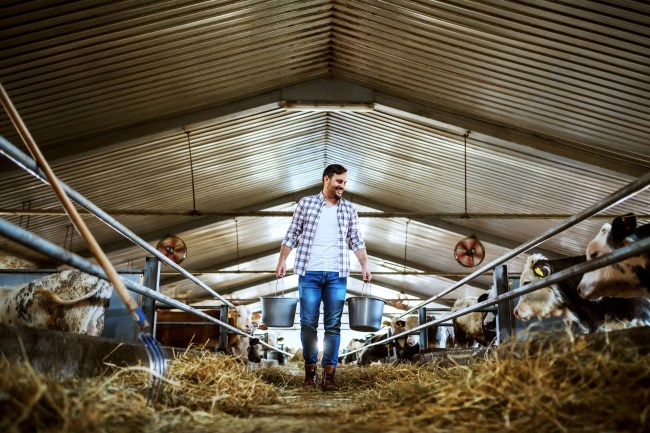 Rise and shine, kids! It’s 3:30AM and these cows aren’t going to vlog themselves being milked! Farmers are becoming influencers and I am EXCITED. If Trump plans to ban TikTok, he’ll have to contend with an army of angry, blue collar egg-collectors now.

NY Times– Though Mr. Gold sells poultry and eggs from his duck farmin Vermont’s northeast corner, most of what he produces as a farmer is, well, entertainment.

Then, twice a week, like clockwork, he posts a short video on YouTube about his exploits as a neophyte farmer, often highlighting failures or pratfalls. Keeping a close eye on analytics, he has boosted his YouTube audiences high enough to provide a steady advertising revenue of around $2,500 to $4,000 a month, about eight times what he earns from selling farm products.

Alright, first things first: this dude is a GREAT vlogger. Once you can admit that Vlogging is actually a skill, you have to acknowledge that Farmer Gold is, in fact, gold. His delivery, his cadence, the quality of the cameras, whoever the hell he hired to edit these vids… the dude has YouTube star written all over him. He even has a vid in the milli club:

Not surprising. The power of a good title cannot be overstated. That’s one abnormal duck. I clicked.

“The storytelling part is what I’m good at,” he said. “I’m not that good at the farming part.”

Mr. Gold, who is short and stocky, with the good-natured ease of a standup comedian, does his chores while carrying a digital camera in one hand and murmuring into a microphone.

Just a quick thought, if I may: the good-natured ease of a standup comedian? Uhhh earth to New York Times—standup comedians are neither good-natured nor possessing of “ease.” Perhaps we give off that air on stage when we do crowd work, but have you ever spoken to a comic after his/her set? Ever walk into a green room full of comedians? It’s like sitting shiva after a night of too much MDMA.

BUT Farmer Gold does possess a good-natured ease. I liked him from the moment he started talking. Not sure why, but I totally expected him to sound British. Also not sure why you needed to point out that he is short and stocky. This isn’t Hinge.

What a great idea. What a development. Love a good farmer on YouTube. Now excuse me, I gotta buy some farmer Gold merch.