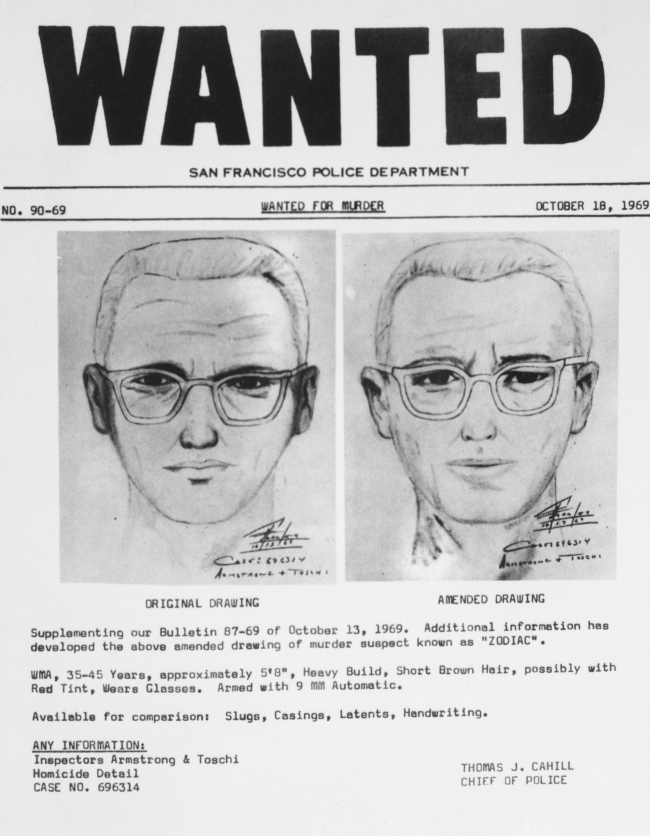 In the late 1960s, the Zodiac Killer was terrorizing people in Northern California, committing numerous assaults and murders while at the same time sending a series of taunting and threatening letters and cards to area newspapers.

The serial killer has never been identified and the California Department of Justice has maintained an open case file on the Zodiac murders since 1969.

This week, a independent investigative group known as the Case Breakers claimed to have uncovered the identity of the Zodiac Killer. After their lengthy investigation, they believe the Zodiac Killer’s true identity is that of an Air Force veteran and professional house painter who died in 2018.

Related: A Guy May Have Revealed The Alleged Zodiac Killer’s Identity On Facebook Years Ago After Becoming Friends With Him

Not everyone is buying their claims, however. Especially those in law enforcement.

The San Francisco Chronicle, which was knee deep in the original Zodiac killings back in the late 1960s, also expressed serious doubt about the Case Breakers’ supposed findings.

The team, calling itself the Case Breakers, said it is basing its theory on several factors, including a similarity in photos of their suspect to a 1969 police sketch of the Zodiac, particularly with what appear to be identical forehead scars, and on anagrams they say reveal their suspect’s name. They also say they have proof that their suspect killed Cheri Jo Bates, a woman slain in Riverside in 1966 that some have attributed to the Zodiac — a theory that Riverside police said in August they have debunked.

The FBI and the San Francisco Police Department also don’t believe the Case Breakers have actually solved the 50-plus year old cold case.

Federal and police investigators tasked with solving the 52-year-old Zodiac mystery, however, said this new tip doesn’t hold up. The Zodiac killed five people in 1968 and 1969 in the Bay Area, his last victim being cab driver Paul Stine in San Francisco, and mailed taunting letters with ciphers to The Chronicle and other newspapers.

“The Zodiac killer case remains open. We have no new information to share at the moment,” the San Francisco office of the FBI said in a statement Wednesday. The San Francisco Police Department echoed the statement. Sources at both agencies told the Chronicle the evidence presented by the Case Breakers does not appear to be conclusive.

“Is there a chance that (the Case Breakers suspect) killed Cheri Jo Bates? No,” Riverside Police Officer Ryan Railsback told the Chronicle. “If you read what they (the Case Breakers) put out, it’s all circumstantial evidence. It’s not a whole lot.”

As for any Zodiac links to Bates’ murder, Railsback said his department worked with FBI agents to debunk a letter and other indicators that had purportedly pointed to the Zodiac, and in August announced that information along with a $50,000 reward for tips leading to Bates’ actual killer. The Case Breakers called him about the reward, he said, but they didn’t follow up when he asked for more information.

In fact, a letter sent to the Riverside Police Department’s Cold Case Unit in 1967 insinuating that the Zodiac Killer might have been involved in Bates’ death was later DNA tested and found to have been written by a teenager in 1967 who investigators say wasn’t involved in Bates’ murder, and admitted to sending the letter as a “sick joke.”

Kevin Fagan of the San Francisco Chronicle, perhaps the longest-tenured Zodiac reporter in the country, says he’s been getting tips like what the Case Breakers claim to have uncovered for 25 years.

The only person ever officially named as a suspect was a man named Arthur Leigh Allen of Vallejo, a convicted child molester, who died in 1992, and he was never charged with any of the Zodiac’s crimes.

Six years ago, a relative of the Case Breakers suspect contacted the Chronicle claiming the man who is the Zodiac Killer lived in Groveland, California and had tried to murder him with a hammer.

Investigators checked out the relative’s claims and determined that there didn’t appear to be any Zodiac connection.

This week, the former daughter-in-law of that same Groveland man, Michelle Wynn, spoke with the Chronicle and stated that she believes the Case Breakers have solved the Zodiac killings.

Wynn says that she moved out of the state to get away from threats from the man and his supporters.

“It’s my birthday today, and this all coming out is a great birthday present for me,” said Wynn. The Case Breakers suspect “is the Zodiac, without a doubt. Being around him, knowing his demeanor and his shadiness and twistedness — I have an intuition, I can read people.”

So is this deceased Air Force veteran and professional house painter actually the man who committed all those Bay Area murders way back in the 1960s?

As Fagan writes, “There’s always that queasy feeling that one of these thousands of tips will be ‘the one,’ and I’ll miss it.”