I Hereby Challenge This Classless TikTok Tool ‘FckJoshy’ To A Duel 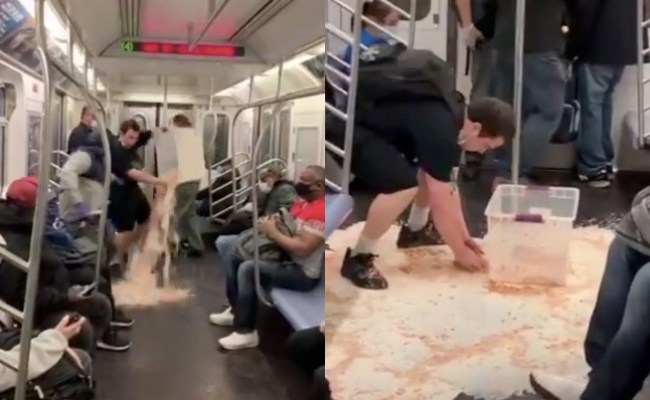 “What is a duel, exactly?” he ponders as he twirls his 19th-century-looking mustache (which is actually true because the #QuarantineBeard game is outrageous these days). Well, according to Merriam-Webster, a duel (noun) is “formal combat with weapons fought between two persons in the presence of witnesses.”

Now, seeing as though I don’t own a musket or sword, nor do I advocate for violence, a “duel” may not be the proper way to settle things, as much as I may desperately want to Kill Bill-style kung-fu kick this turd into oblivion.

Maybe we can have a drinking contest or play a pick-up game of basketball. I don’t even hoop and I’m 100% confident I’d mercy rule this sentient-jelly-filled-donut. Straight buckets. Seven game series of FIFA, perhaps?

Maybe we can open-palm bitch-slap each other, like you see in those viral videos where 300-pound grown-ass men crack each other in the jaw until one of them passes out. Hell, if this kid has the stones (which I highly doubt considering his entire brand of “comedy” seems to be built on cowardice), I’ll even settle for an interview: hop on the phone with me for 15 minutes so we can get down to the bottom of when and where your parents failed in raising you. That has to be the only reasonable explanation here, as no person that was raised in a loving home with responsible parents could possibly turn out like this asshole.

In fact, as I write this, I’m actually beginning to feel quite bad for wee little FckJoshy: only loneliness and extremely low self-confidence can produce this sort of inexplicably childish behavior. He just wants to fit in, you guys! He wants to laugh with us, not be laughed at! It’s not his fault he somehow simultaneously looks both 13-years-old and 43-years-old. Can’t you see, this is all just a cry for help.

Here’s the issue with the viral prank generation: they don’t know how to read the fucking room and have zero consideration of other people. When the Jackass guys were raising late 90s hell, they were doing so to each other — they just so happen to be in the presence of other people. Sucking innocent and unwitting bystanders into your feeble attempts at virality is the definition of selfishness. We’re in the middle of a once-in-a-lifetime pandemic and these hard-working New Yorkers are still cramming on a shit-stained metal tube to traverse the underground corridors of New York City. Then here comes this living Pillsbury Doughboy thinking it’s a good idea to make their travels infinitely more difficult by… spilling gallons of Fruity Pebble-soaked milk onto a subway car? Seriously, where are this kid’s parents? I’ve got a pretty spacious apartment, he can come crash on my couch if his family no longer love him — had my son come home from a day of pranking everyday people who are simply trying to mind their own business as they transit to and from work, he’d have to start calling me “Eric” and not “Dad”.

Look how far we’ve come, Joshy, I began this article by challenging you to a Mexican standoff and now I’m offering you a place to live. This is how people should act in a pandemic: compassionately. Take notes, you spineless squid. And if you’re reading this, Josh, just know: you are the worst and everyone on the internet hates you. Have you seen Lil Dicky’s new show Dave? You know how when he was a kid at sleepaway camp, all of the campers would point and laugh at him as he desperately made a fool of himself for attention to fill the void of the shame created by his broken penis? That’s you, dude. Hope the “views” or “clout” or whatever ridiculous rationalization your subconscious tells you during those quiet moments as your inadequacies threaten to swallow you whole was worth it!

Editor’s Note: it turns out Lil Joshy here has a history in “stand-up comedy”, and to the surprise of no one, it’s righteously awful! His “set” begins at 26:00 minutes if you want to further wrap your head around how truly unfunny this kid really is — a trainwreck in all its glory. No wonder he traded in joke writing for… whatever cuck clownery he peddles on TikTok.