FedEx Driver Says ‘I Can’t Do That, Boss’ While Refusing To Help 89-Year-Old Man Who Fell Off Front Porch 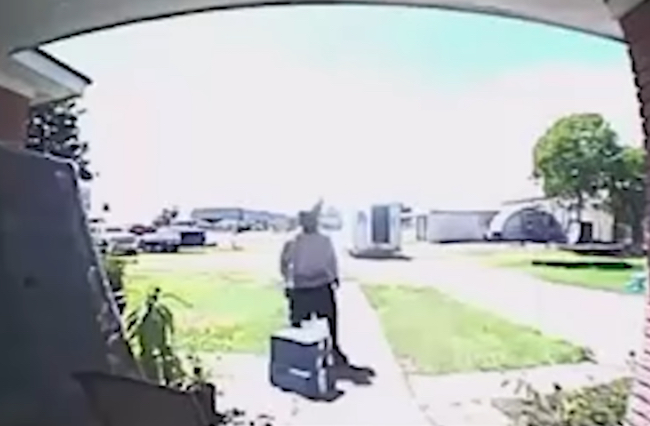 A FedEx delivery driver is getting heat after refusing to help an 89-year-old man after he had fallen on his front porch in Freeport, Texas.

The short incident was caught on a Ring doorbell. In the clip, the elderly man can be heard saying, “Hello, help, please. Give me a hand. I need to get up.”

The FedEx driver can be heard replying “I can’t do that, boss.”

Maria Kouches, the daughter of the 89-year-old, told ABC 30 that her father had fallen about 15 minutes before the delivery was made. She explained he has dementia, has fallen several times before, and often has trouble with his legs.

Kouches told ABC 30 that her father uses a walker to get around and he was “maybe trying to go back inside and his leg gave out.”

Now, I’m not saying what the FedEx driver did was correct. I think it’s important to be a decent human being, especially in these times.

Should the FedEx guy have asked the man what happened, asked him if anyone else was home, and maybe rang the doorbell to see if someone else was inside? Absolutely. He could have even called the cops and waited for them to arrive.

I don’t blame the driver for not physically assisting the elderly man. Especially with Covid-19 ripping through Texas and neither man seems to be wearing a mask.

This driver might have a family at home to worry about, and helping an old man up possibly suffering from unknown medical issues, could put his life and his family’s life at risk.

The driver should have helped in some way but I absolutely don’t blame him for not getting physically involved in the situation.

FedEx issued the following response to Storyful: “We extend our thoughts and concerns for the well-being of the person depicted in this video. The safety of our team members and customers in the communities that we serve is our highest priority. We are reviewing the circumstances behind this incident and will take the appropriate action.”