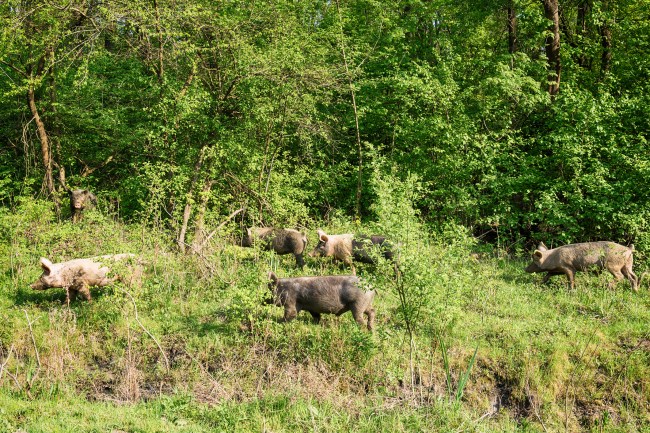 Officials are sounding the alarm about an exploding number of ‘super pigs’ who can run up to 30 MPH, carry AT LEAST 30 diseases and 40 parasites, are hostile towards people, and pretty much destroy all vegetation in their way. You don’t need to be an industry insider to see why a species like that could be awful

It has only been 13 months since everyone on Twitter was laughing at that ’30-to-50 feral hogs’ guy. Remember him? That was only last August! It feels like a lifetime ago. Here’s the original tweet in case you need a refresher:

That dude got roasted alive for his tweet. If you want a good laugh you should go look at the replies. But feral pigs are a huge problem for countless Americans. I passed 7 wild pigs on the side of the highway just last weekend and I don’t even live out in the boonies.

These ‘Super Pigs’ are the result of cross-breeding between domestic (American) breeds and the European wild boar. They’ve taken on characteristics of both breeds in an alarming way. Like the domestic breeds they are ‘fertile at all times’ and have more than 10 piglets per litter on average. They’ve inherited heavy fur from the wild boar, large size, and tusks according to WSAV:

According to Nolte, they’re highly intelligent, have very good senses of smell and have physical attributes, like heavy fur, which increase their ability to survive in the wild. This is what they inherit from boars.
Equally problematic is the qualities they get from domestic pigs, which have been bred to be fertile at all times and to have large litters, more than 10 piglets in each litter, on average.
Feral hogs are also able to grow very big — about 75 to 250 pounds on average, the Department of Agriculture says. But they can be twice that size and reach up to three feet in height.
“The problem with the hybrids is you get all of the massive benefits of all of that genetics,” says biologist Ryan Brook, of the University of Saskatchewan.
Hogs, according to Texas Parks and Wildlife, have four tusks that are constantly growing (two on top, two on bottom). They tend to be dark brown or black once they mature.
They can run up to 30 miles an hour. (via)

Experts are calling the rising population a ‘Feral Swine Bomb’ with a population of Super Pigs exploding faster than anyone can keep up with. Nobody cared when it was just a few thousand but when each litter is 10+ piglets the numbers have ballooned exponentially.

They are already costing the United States $2.5 BILLION in damager every year.

That’s according to Dale Nolte, manager of the National Feral Swine Damage Management Program at the Department of Agriculture, who tells The Atlantic that the increasing numbers of feral hogs in the U.S. is sometimes referred to as a “ferral swine bomb.”
He says because they can reproduce so quickly, it’s very difficult to control the problem.
“To go from a thousand to two thousand, it’s not a big deal,” Nolte told The Atlantic. “But if you’ve got a million, it doesn’t take long to get to four [million], then eight million.” (via)

So, why exactly are they a problem beyond their size and numbers? Well, they pretty much suck in every way imaginable. They chew up and eat everything. They get violent in the presence of food.

Here’s a quick rundown from WSAV of the problems these feral hogs pose. There are already an estimated 1.5 million feral hogs in Texas alone. I see them regularly in Florida. And this is what they bring with them:

— Eating fruit, berries grapes and nuts from orchards and destroying the saplings when they rub plants with their bodies to get parasites off their skin

— Organisms and pathogens that can be transmitted include swine flu, salmonella, hepatitis and pathogenic E. coli

— Physical attacks — they’re known to have been aggressive toward farmers, hikers and picnickers. The department says aggression is increased when humans are associated with food because of handouts or improper waste disposal

It was only three years ago that this 820-pound wild hog was shot in Alabama. Let that sink in for one moment. An 820-pound angry wild hog with thick skin and possibly carrying diseases. It’s also hungry and either sees you as food or recognizes that you probably have food. That’s a situation I never want to find myself in. Here’s a 411-pounder caught in Texas just last year.

The alarming report claims feral hogs used to be found in 17 states but over the past few decades they’ve expanded to 39 states and there are 1.5 MILLION in Texas alone. Florida has over 500,000. California has an exploding population.

For more on this story, you can visit the articles on WSAV or Fox News.