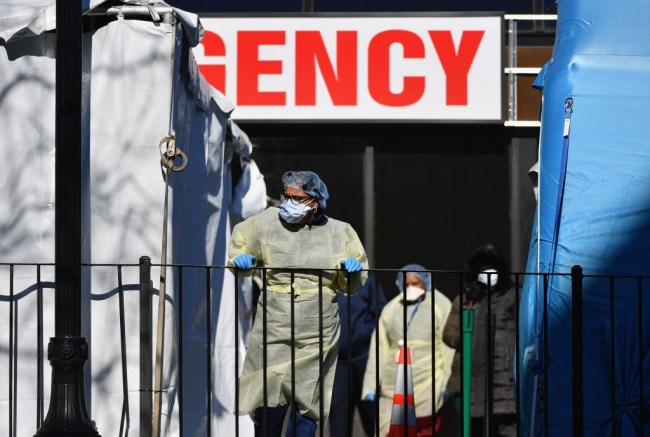 There is a lot of misinformation being spread around about the coronavirus, which can be dangerous and can cost lives. A new conspiracy theory is suggesting that the coronavirus pandemic is a hoax.

On Sunday, the #FilmYourHospital was trending on Twitter. The social media hashtag encouraged people to go to their local hospital and film the current situation regarding the COVID-19 outbreak that is currently raging on in the United States. The “Film Your Hospital” hashtag claims that hospitals are empty and not packed with people suffering from coronavirus infections.

Todd Starnes, a journalist from the Starnes Media Group, visited the Brooklyn Hospital Center in downtown Brooklyn, New York. The Periscope video shows the hospital looking relatively quiet and not very busy, especially since New York City is the epicenter of the coronavirus pandemic in the United States.

This is the “war zone” outside the hospital in my Brooklyn neighborhood. https://t.co/66FZ9VO3Jj

DeAnna Lorraine, a congressional candidate in California, posted a video on Twitter for the #FilmYourHospital trend.

“Just went to 2 hospitals in LA to check out these ‘War Zones’ the MSM keeps telling us about,” Lorraine wrote. “They are very quiet & EMPTY. We are not being told the truth. Why?? Let’s get #FilmYourHospital trending. We ARE the news now. We can’t trust the news. Post pics of ur hospital here!”

Just went to 2 hospitals in LA to check out these “War Zones” the MSM keeps telling us about.🏥

They are very quiet & EMPTY.
We are not being told the truth. Why?? Let’s get #FilmYourHospital trending. We ARE the news now. We can’t trust the news. Post pics of ur hospital here! pic.twitter.com/5AJ5L588lQ

Scott Presler drove by the Inova Fairfax Hospital outside of Washington D.C., and the medical facility appeared to be not busy at all.

I visited my hospital in Fairfax County,

one of the largest population hubs in America.

I didn’t see a lot of cars, a lot of people, or hardly any activity.

Wanted to see with my own eyes. pic.twitter.com/bv4E2IxlOf

Other Twitter users posted photos and videos from health centers in the U.S., including Kings County Hospital in NYC, Mount Sinai Hospital in Queens, the Fairview Hospital in Cleveland, Ohio, and the Spring Valley Hospital in Las Vegas, Nevada.

Empty ambulances parked at Mt Sinai Morningside (formerly St Lukes) ER entrance in NYC. Others drive by. Spoke to a staff member "It's not the volume, but the severity of the cases we have that is bad" #CoronavirusNewYork #filmyourhospital #COVID19 pic.twitter.com/IhKz7JQYOF

I am starting a thread on the “war zone” and overrun hospitals. Please add your pics or videos here of your local hospital if you happen to be near one. First Up – Baylor Grapevine, supposedly has 15 cases and being overrun. Ghost town. pic.twitter.com/iWrvFZu7wo

The we have Texas Health Harris Methodist; small emergency room, and three reported cases… crickets. Curious to see other hospitals around the country amd what the “MSM’s war zones” really look like (emergency room specific). pic.twitter.com/axE8EEzom7

I thought NYC Emergency rooms and hospitals were overrun with Coronavirus patients?

You can hear Governor Cuomo on TV talking about being in short supply as the waiting room sits near empty.

Yesterday afternoon, my wife and I drove past Mt. Sinai – Queens to see the “apocalyptic conditions” both inside and outside that were reported in our local, national and world news reports. It sure looks like chaos, no?#FakeNews pic.twitter.com/v9xskR1vAr

The James’s Street Hospital in Ireland was like a “ghost town.”

One video from Georgia featured a man on camera spewing a completely unfounded conspiracy theory that the coronavirus pandemic is a hoax and a globalist plot to permanently discontinue cash money and to establish a “new world order” with the help of 5G cell phone towers.

Well. That was interesting. pic.twitter.com/oafPbQ2RTw

There were photos and videos also showing hospitals that appeared to be very busy.

This photo was taken by a friend March 16 at the Cleveland Clinic, Main Campus. CCF and UH teamed up for drive through testing, this was the first location opened.
As you can see, the line is so long it extends down the street out of sight.

Most of the videos uploaded to Twitter were not verified, and some of the footage could have been taken before the coronavirus pandemic hit the United States. It should be stressed that there have been at least 2,484 Americans who have died from the coronavirus in the past few months.

Strangely, CBS News used footage from a hospital in Northern Italy in a news piece about New York City hospitals being overrun and needing more ventilators.

Here is the original footage from Sky News.

There are some questions as to if China is releasing factual figures as to their coronavirus cases and deaths. The Chinese government reported there were no new cases of the super contagious coronavirus for the sixth consecutive day in the epicenter of the Hubei province that has 60 million people.

New reports from China discovered an alarming amount of urns have been ordered. “Outside one funeral home, trucks shipped in about 2,500 urns on both Wednesday and Thursday, according to Chinese media outlet Caixin,” according to Bloomberg News. “Another picture published by Caixin showed 3,500 urns stacked on the ground inside. It’s unclear how many of the urns had been filled.”

Another eye-opening revelation is that the crematory in Wuhan has been reportedly going non-stop.

“It can’t be right … because the incinerators have been working round the clock, so how can so few people have died?” an Wuhan resident surnamed Zhang told RFA. “Some social media posts have estimated that all seven funeral homes in Wuhan are handing out 3,500 urns every day in total.”

“Funeral homes have informed families that they will try to complete cremations before the traditional grave-tending festival of Qing Ming on April 5, which would indicate a 12-day process beginning on March 23,” the report stated. “Such an estimate would mean that 42,000 urns would be given out during that time.”