First Confirmed Case Of Coronavirus Reinfection Documented In A Man Who Caught It Twice Within 4.5 Months 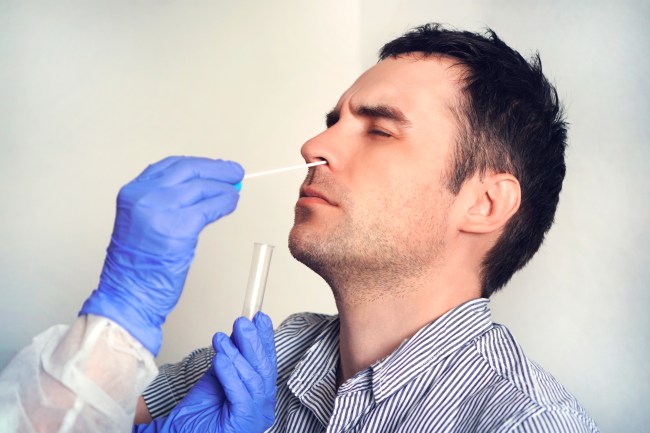 There have been rumors of ‘reinfection’ across the globe since all of this began but this is the first time researchers have been able to confirm a case of reinfection. The 33-year-old man was first infected by coronavirus back in March, was symptomatic for several days, and then he caught it again four and a half months later while traveling in Europe.

Experts caution that this is an outlier. There have been 23.7 MILLION confirmed cases worldwide with that real number likely exponentially higher and this is the only documented case of reinfection.

Statnews reports that researchers from the University of Hong Kong ‘sequenced the virus from the patient’s two infections and found that they did not match’ when they found differences in the 24 nucleotides that make up the virus’ RNA. This means the second infection was not tied to the first.

Then during his second episode, the patient was returning to Hong Kong from traveling in Spain via the United Kingdom, and he tested positive during his entry screening at the Hong Kong airport on August 15, the researchers said. The man was hospitalized again but remained asymptomatic.

“The patient got re-infected 4.5 months after the first infection. Therefore, it shows that for this patient, the immunity induced by the first infection is short lasting,” Dr. Kelvin Kai-Wang To of the University of Hong Kong, who worked on the study, said in an email to CNN.

For the study, researchers at the university and various hospitals in Hong Kong analyzed specimens collected from the patient 10 days after his symptoms emerged in the first episode and then one day after hospitalization for the second episode. Genetic analysis suggested that the first infection was from a strain of the coronavirus most closely related to strains from the United States or England, and the second infection was most closely related to strains from Switzerland and England.

This does not change the widely-held belief among experts that antibodies provide some measure of protection for at least 3 months but most likely up to a year. One takeaway from this, however, is that even those who have natural antibodies should still get the vaccination when it becomes available because reinfection is possible.

There have been rumors of reinfection throughout the pandemic that were often found to be the body shedding dead virus that triggered the tests as positive but this is legit. This is a documented case of reinfection and a clear cut example that it’s possible to be infected by this virus twice.

Statnews has this to say about how long protective antibodies might last:

Studies are increasingly finding that most people who recover from the illness mount a robust immune response involving both antibodies (molecules that can block the virus from infecting cells again) and T cells (which can help clear the virus). This has suggested that people would be protected from another case for some amount of time.

But based on what happens with other coronaviruses, experts knew that immunity to SARS-CoV-2 would not last forever. People generally become susceptible again to the coronaviruses that cause the common cold after a year or even less, while protection against SARS-1 and MERS appears to last for a few years.

This feels like a question we won’t know the answer to for quite some time because it’s something that takes a long time to answer. There just isn’t enough data out there yet given that this pandemic has only been raging on for three quarters of a year.

For a full rundown of this news, you can click here to visit Statnews and read their article.